The Pentax Optio W60 has a lot of development history behind it. Indeed, dating to 2003, Pentax has the longest-running line of waterproof digital cameras. After several generations, the Pentax W60 is still light, simple, and flat. Significantly upgraded from the last generation, the Pentax W60 meets many of the market's recent trends, with a wide-angle 5x optical zoom ranging from 28-140mm. A slightly larger sensor helps keep image quality up despite the 10-megapixel resolution, and a 2.5-inch LCD has higher resolution than its predecessor, with 230,000 pixels, always helpful when checking focus or viewing images after capture.

Look and feel. As I say, the Pentax W60 is light, coming in at 5 ounces (144g) with a battery and SD card, making it one of the lighter models in the roundup. Though the Z33 is lighter, the Pentax W60 feels lighter over its larger body size.

Available in blue and silver, the front plate has an attractive brushed metal finish, but most of the body appears to be plastic. A rough black bezel surrounds the lens, and serves as a good tactile reminder that the lens is nearby, helping keep fingers away from the lens. A small lip on the front edge makes for a good grip, with your fingertips finding traction on the ridged Pentax logo. Four raised bumps on the back help the thumb out a bit. Combined with the light weight, these two grip surfaces make the Pentax W60 easy to hold in most wet conditions, including ocean waves and pools.

Controls. The Pentax W60's controls are rather unconventional on the back, with mostly raised square buttons. Though they're unconventional, they're easy enough to use for a gadget guy like me; however, those with larger thumbs might have a little trouble, especially with the zoom rocker. I'd prefer slightly larger buttons, set more widely apart.

The shutter button is mushy at best, and after some use (and testing in the lab), the button was harder and harder to activate. Not a great sign for durability, unfortunately, though our timing tests have been known to dent a shutter button occasionally. 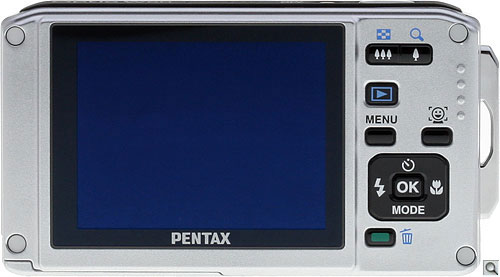 Shooting. Getting the Pentax W60 out in the open tells a lot more than you can get from a spec sheet. It's a bit of a mixed bag, with some significant positives but only a few negatives.

Our copy of the Pentax W60 has a damaged shutter button, unfortunately, which was likely damaged during testing, so though I was concerned about that initially, it seems to be limited to this particular model. When I had the camera at the beach before the lab tested it, it worked fine.

The Pentax W60's f/3.5 lens is a little slow compared to some of the others in this roundup, and it has no image stabilization, so it's best used outdoors.

The major problem with the Pentax W60 is its LCD. I had a very hard time in full sunlight seeing the image on the LCD, at both the beach and at the pool. It was more difficult at the beach, because the brackish water of Tybee Island presented a fairly dark background; but even at the pool I had trouble seeing what was on the LCD. The Pentax W60 was by no means the worst performer, but it was bad enough that it sticks out in my memory as significant. Movie mode was also mixed, producing hazy images. And the HD movie mode is only capable of capturing 15 frames per second, which really isn't sufficient for action. 640x480 performance was the usual 30 frames per second, though it also suffered from low contrast.

On the plus side, the Pentax Optio W60 has the best optical quality of the entire roundup: at wide, tele, and middle focal lengths. Chromatic aberration is low, only mentionable at wide angle, and corner sharpness is quite good. That's unusual. Image rendering is also better, with good color, well-controlled noise suppression that retains detail pretty well, and even white balance performance is good indoors and out.

A special high-speed capture mode is also of value, though it operates at a reduced resolution of 5 megapixels instead of the Pentax W60's 10 megapixels. Still, capturing five frames per second usually requires a mid-grade digital SLR costing $1,200 or more. The Pentax W60 also focuses faster than any camera in the lineup, which is a huge usability benefit, especially outdoors when you're trying to capture action. Major kudos to Pentax for good quality and great speed.

Perhaps most remarkable is the high print quality at the lowest ISO, delivering 13x19-inch prints of decent quality across the frame. ISO 800 shots are good at 5x7, which we'll call a pass for this test, especially considering the relatively slow lens.

Shutter lag is also good, unless you factor in that difficulty with the shutter button itself.

And though it's not considered a rugged camera, the Pentax W60 did experience a good drop onto rough asphalt thanks to my five-year-old son, from about three feet. Though it did get a pretty good ding in one of its corners, it still works just fine.

Analysis. As I said, some lows combined with the most impressive highs where it matters most. If you factor in the likelihood that our shutter button was damaged in testing, the only major low becomes the LCD's viewability in bright sunlight. Since the Pentax W60 lacks an optical viewfinder, it's an issue worth considering. Overall, though, the Pentax W60's image quality pushed it into the Dave's Pick category when we reviewed it late last year, and comparing the quality to the competition we see here it raises my eyebrows again. Winning the autofocus speed contest makes the Pentax W60 look like a pretty good choice for your next outdoor adventure.

How the Pentax W60 fared:

Click here to go on to the next camera>>