Introduction
Canon dropped an early Christmas present with the announcement of this consumer-level lens. As an upgrade from the 18-55mm ƒ/3.5-5.6 USM EF-S lens that is bundled as the standard ''kit'' lens with many Canon dSLR cameras, many Canon photographers may be looking to Santa longingly. And Santa's budget may not be pushed too far, with an announced price point of $199.

The real news here is the inclusion of Canon's image stabilization, typically seen only in higher-end glass. With a touted performance of four extra stops, it should make a real difference in the photography of the average user.

Canon digital SLR cameras with sub-frame sensors have a ''crop factor'' of 1.6x. Thus, for this particular lens, it will exhibit an effective focal length of 29-88mm. The lens takes 58mm filters, and a lens hood is indicated as an optional accessory.

This lens isn't a ''constant'' lens, in that as you increase the focal length, both the maximum and minimum aperture sizes decrease. The following table reflects the changes as you zoom:

Sharpness
The blur graph shows a remarkable improvement from the non-IS 18-5mm ƒ/3.5-5.6 lens; it's interesting to note the only real change (according to the specifications) between the two lenses is the addition of an aspherical lens to deal with the effects of chromatic aberration.

However they've done it, the 18-55mm ƒ/3.5-5.6 IS shows excellent sharpness at 18mm wide-open at ƒ/3.5, a focal length/aperture combination which typically shows off the weakness of most consumer-grade lenses. Image sharpness is essentially even across the frame, and doesn't exceed 2 units on our scale of 1-12. For a lens of this price point, this is amazing performance.

The sharpness performance improves at ƒ/3.5 as you zoom out the focal range and stop down, achieving its optimum sharpness at 35mm and ƒ/5.6. Diffraction starts to set in around ƒ/16, but you don't really start to see mediocre performance until the aperture is stopped down to rarely-used f-stop numbers such as ƒ/29. At that point, the image is quite soft, but at least the softness is uniform at between 4 and 5 units. All in all, excellent performance.

Chromatic Aberration
Chromatic Aberration was a problem on the predecessor to this lens, but the inclusion of the aspherical lens appears to address the issue the lens widest focal length (18mm). When the aperture is set to between ƒ/3.5 and ƒ/5.6, you have radically improved resistance to CA, showing only around 6-7 1/100ths of a percent of CA, compared to between 10 and 12 1/100ths of percent with the previous model. At all other focal lengths and apertures, the CA performance is about the same, which is to say that it is signficant until about 35mm, where it becomes tolerable at between 4 and 7 1/100ths of a percent.

So, Chromatic Aberration is not completely eliminated (that would require a more expensive lens design) but for the aperture and focal length that this lens will typically be used at, it is remarkably reduced.

Shading (''Vignetting'')
We're not talking huge differences here, but the 18-55mm ƒ/3.5-5.6 IS actually has a (very) slightly worse profile when it comes to shading in the corners. You really see it on either lens when zoomed out to wide angle (18mm) where you're looking at a half-stop of light lost. As you approach 35mm this effect is reduced, and you see no more than one-quarter of a stop being lost; above 35mm, the effect is negligible.

Distortion
Distortion is typical for a wide-angle zoom lens; lots of barrel distortion when zoomed to wide (18mm), approaches no distortion in the middle, and gets a bit of pincushion distortion at the telephoto end. At its worst, distortion is almost one percent. With the 18-55mm IS, the distortion is fairly linear, and meets at the zero-distortion level at around 40mm. You can turn your curves back into straight lines easily with most image processing software.

Comparing this to the previous 18-55mm model, the distortion was less linear; there isn't a point where the barrel distortion aligns neatly with the pincushion distortion (they overlap closest at around 28mm).

Autofocus Operation
Autofocus performance is fast and quiet, with the whole lens racking through its focus in just under one second. While focus performance is going to depend alot on the body the lens is mounted to, on the digital Rebel Xti I sampled the lens with, I didn't have a single problem with focus, and focusing between points was lightning quick.

Build Quality and Handling
To look at the non-IS version of the 18-55mm fƒ/3.5-5.6 lens, there isn't much difference between them; they're both very light lenses, made of plastic construction. The IS version has changed the zoom dial grip texture; arguably, the non-IS version was just fine, but with the new grip there's no confusing the two. Both lenses have a gasket seal by the lens mount, but it's plastic all the way - however, this probably accounts for the low price of the lens. The IS version of the lens is perhaps 2mm longer, to fit in the new aspherical lens and moving lens element that is used for image stabilization.

Manual focusing with the 18-55mm ƒ/3.5-5.6 IS isn't great, as the small focus dial at the front of the lens goes through the entire focus range in only a quarter-turn, so there's little room for high fidelity. Not that you will probably need to do much manual focusing with this lens, anyway.

Canon is notoriously stingy with its lens products: a lens hood and pouch are sold separately. The lens hood is a bowl-style hood that reverses for easy storage.

Canon EF-S 18-55mm f/3.5-5.6 USM ~$145
This is the most obvious comparison, and it's a fairly easy one. The IS version beats the non-IS version handily, especially in sharpness, but noteably in distortion and resistance to chromatic aberration. Adding image stabilization makes it very much worth the extra pennies.

Sigma 18-50mm f/3.5-5.6 DC ~$100
Coming in as the low-cost leader, we haven't tested the Sigma option in this category. User reports on this lens are mixed, suggesting a slow autofocus speed and mediocre image quality.

Canon EF-S 17-85mm f/4-5.6 IS USM ~$500
Zooming out a little wider and farther, the 17-85mm is also an image-stabilized lens, perhaps a little more versatible, but only slightly improved in the aspect of sharpness; resistance to chromatic aberration is tolerable (noticed most at wide-angle), but distortion and vignetting leave something to be desired. This increased capability and versatility is reflected in its significantly higher price.

Canon EF-S 17-55mm f/2.8 IS USM ~$950
On the other side of the price spectrum, the 17-55mm goes a hair wider, but also features image stabilization. That's where the similarities end; with a constant ƒ/2.8 aperture and a lens profile that's head-and-shoulders above the 18-55mm, it's a lot more expensive, but there's no question you get what you pay for with this lens.

Conclusion
The Canon 18-55mm ƒ/3.5-5.6 IS EF-S lens is a remarkable upgrade to the standard kit-style lens. Even if you're not interested in the image stabilization that's been added, the addition of the aspherical lens element (and whatever other fine-tuning the lens wizards have been up to in the lab) shows off improved sharpness and resistance to chromatic aberration. Definitely worth the upgrade. 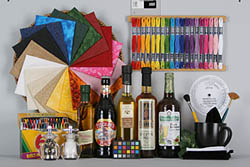 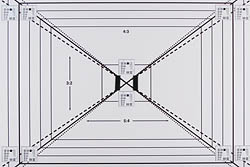