At the widest end of its range, the Nikon 16-36mm f/4G VRII produced somewhere between 1.5 and 2 stops of shake reduction in our tests: useful but unremarkable. The increase in blur with increasing exposure time was fairly gradual, though, so even at exposure times of a half a second, roughly half of the test images fell within either "Good" or "Acceptable" blur limits. 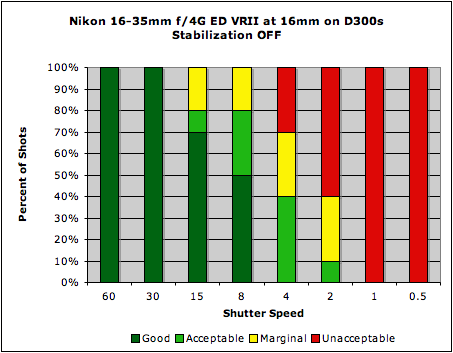 At 35mm, the story was quite a bit better, with the lens conservatively providing a full 3 stops of blur reduction. At really slow shutter speeds, the lens' stabilization degrades fairly abruptly, as its moving element simple runs out of travel for compensating for camera movement. At 1 second, the 8 out of 10 shots captured were either Good or Acceptable, while at 2 seconds, none were. Overall, by allowing sharp, hand-held images at shutter speeds as slow as 1/2 to 1 second, the Nikon 16-35mm f/4G ED VR II makes a lot of otherwise impossible hand-held wide angle shots quite feasible. 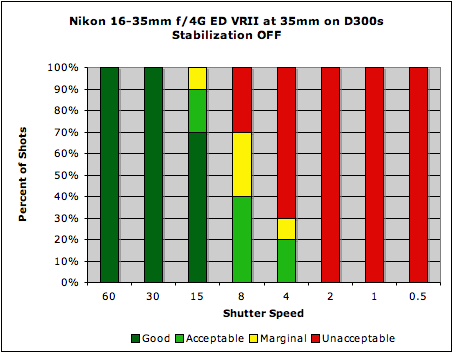