Details concerning the Nikon 16-35mm ƒ/4G ED VR II AF-S first trickled out in September 2009, but it wasn't until February 2010 that the lens was announced and started shipping.

The 16-35mm lens was developed to be compatible with full-frame (FX) cameras; on a body equipped with a DX-style sensor, the lens will have an effective field of view of 24-52.5.mm. The lens features a constant ƒ/4 aperture across its range of focal lengths.

The lens takes an HB-23 petal-shaped hood and 77mm filters, and is available now for approximately $1,100.

The Nikon 16-35mm ƒ/4G ED VR II delivers remarkable sharpness uniformity across the full 35mm frame, even at its shortest focal length and maximum aperture. At 16mm and ƒ/4, the entire frame is sharp on a sub-frame camera like the D300s we used in our test, and even on the full-frame D3x body, only the very corners of the frame were slightly soft.

The complexity of the 16-35mm ƒ/4G's optical design appears in our test data in the form of small rapid micro-fluctuations in both sharpness and the curvature of field that gives rise to these fluctuations, as the subject moves through the point of best focus. While the sensitivity of the measurements made by our testing software makes these minor variations in blur quite evident in the color scheme of our results graphs, for the most part they are well below the level that most users will be able to detect in images shot with the lens. 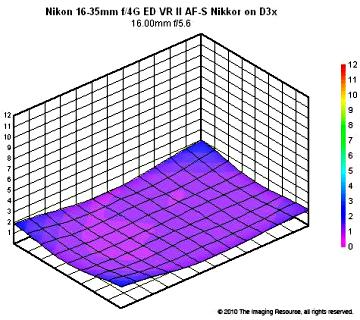 You can see some of these micro-variations in the blur plots for the 16mm ƒ/5.6 case: the full-frame plot shows an area of greatest sharpness (the lighter purple color) a little to the left of center, while the sub-frame plot shows the area of greatest sharpness more centered. On a practical basis, there's really little or no difference in the lens performance represented by the two plots, as the actual difference in sharpness across much of the frame is less than a tenth of a blur unit. (In our experience, a half of a blur unit is detectable, a quarter really isn't. Barring a 100 megapixel sensor, we can't imagine a scenario in which a difference of a tenth of a blur unit would be visible, regardless of final print size.)

With the lens mounted on the full-frame D3x, we note much the same performance, with the addition of a dash of corner softness in certain circumstances. It's ever-present at 16mm, but appears only in the extreme corners (around 2.5 blur units, and coincidentally, where the extreme distortion is most noticeable). Stopping down to ƒ/8 produces the best results at 16mm.

Zooming in the lens towards 35mm while at ƒ/4 produces a fairly consistent pattern between 20-35mm; a sharp sweet spot in the center, with slight corner softness to either side. The center rides at around 1.5 blur units, and the corners stick in the vicinity of 2 blur units.

Stopping down does improve image sharpness, but only marginally, and by ƒ/11 diffraction degrades sharpness slightly. By ƒ/16 we note performance of 2-3 blur units, and at ƒ/22, it's around 4 blur units.

It's more obvious on the D3x than on the D300s, but it would appear that the performance of the lens has been optimized at 16mm rather than 35mm, which makes sense as it will likely be used for the majority of time at its 16mm setting.

Chromatic Aberration
Nikon has seen fit to include several technical features in order to reduce the appearance of chromatic aberration. Particularly, two ED glass and three aspherical lens elements, and a Nano-Crystal coating. Combined with the automatic chromatic aberration reduction in both the D300s and D3x, the impact of CA is slight indeed on both bodies: if it's present anywhere, it's noticeable only in the corners with the lens mounted on the full-frame D3x, and then only at 16mm at ƒ/4 or ƒ/5.6.

Distortion
The 16-35mm ƒ/4 shows pretty dramatic barrel distortion at its shortest focal lengths; literally the highest we've seen in over 200 tests of non-fisheye lenses to date. This may or may not be a consideration for users of this lens: it can be corrected for in software fairly easily (although the process of correcting extreme distortion also has some cost in terms of reduced sharpness in the corners of the frame).

To its credit though, the distortion produced by the lens evens out quite quickly, and reaches very slight levels at 24mm, where there is almost no distortion. After this point there is just slight pincushion distortion in the corners.

Autofocus Operation
An AF-S lens with ultrasonic motor, AF operation for the 16-35mm ƒ/4 is virtually silent and reasonably fast, if not lightning quick: the AF motor took right around a second to slew from closest focus to infinity. The AF-S specification also means you can override the AF motor at any time by just turning the focus ring, without having to switch the camera or lens to manual focus mode. The front element does not rotate during focus operations, making life that little bit easier for polarizer users.

Macro
The lens isn't a dedicated macro lens, but despite this it actually produces fairly good macro results: 0.25x magnification, with a minimum close focusing distance of 27cm (just under a foot).

Build Quality and Handling
The 16-35mm ƒ/4G is composed mostly of polycarbonate plastic, finished in Nikon’s mottled black matte finish. Thanks to the plastic construction it's a little lighter than you'd expect for a lens of its size (680 grams, or one and a half pounds). Then lens has a distance scale under a plastic window, marked in feet and meters, but there are no depth of field markings and neither is there an infrared index mark. Apart from the zoom and focus rings, there are two control switches: one to enable or disable autofocus on the lens (marked M and M/A), and the other to enable or disable image stabilization (marked VR ON and OFF).

The zoom ring has deep rubber ribs and is about 7/8'' wide. The ring takes a ninety degree turn to go through its range of focal lengths, and requires only a slight amount (two fingers) of force to move it. There is a very slight amount of lens extension as the lens is zoomed in and out, but not enough to even approach a mounted filter. Zoom creep is not a factor with this lens.

The focusing ring is composed of deep rubber ribs of a different texture than the zoom ring, and is slightly thinner at 3/4'' wide. The ring has soft stops at closest focus and at slightly past infinity, and takes roughly ninety degrees to go through its focusing range.

The petal-shaped HB-23 lens hood has a smooth interior, attaches to the lens with a bayonet mount and can be reversed for storage. When attached, the hood adds 1.5 inches to the overall length of the lens.

Nikon 14-24mm ƒ/2.8G IF-ED AF-S Nikkor ~$1,700
There's wide, and then there's really wide. It's incredible what a difference of 2mm can make, and even more incredible is the sharpness provided by this lens: it's sharper than the 16-35mm, but not by much. Even more impressively, distortion is actually lower in the 14-24mm than the 16-35mm. Results for CA and corner shading are are about the same, but the 16-35mm does come with image stabilization, where the 14-24mm does not. The 16-35mm can also accept 77mm filters, where the 14-24mm has a fixed lens hood that precludes this.

Sigma 12-24mm ƒ/4.5-5.6 EX DG Aspherical HSM ~$850
Sigma provided the first ultrawide zoom lens for full-frame, in the form of the incredibly wide 12-24mm ƒ/4.5-5.6. The Nikon is by far much more consistently sharp: the Sigma is a bit funky by comparison, especially when used on full-frame. CA was a bit higher in the Sigma and it produced some of the darkest corners we've seen, but to its credit, distortion is actually very well controlled for such a wide lens. No image stabilization, and no facility to use filters with this lens.

Tokina 16-28mm ƒ/2.8 AT-X PRO FX ~$?
Tokina has recently announced this lens for full-frame: it doesn't provide image stabilization and also features a fixed lens hood which precludes the use of filters.

Conclusion
The 16-35mm ƒ/4G VR is an impressive design, providing excellent results for sharpness at its wider angles. It's evident that the optics of this lens are quite complex, to deliver high sharpness across the frame with only moderate chromatic aberration and vignetting and at a relatively affordable price. The only con would be its large distortion particularly at 16mm, but then, that's true of most ultrawide angles. Many people have questioned the inclusion of VR for a wide-angle lens, but with dSLR cameras being used more and more for video production the image stabilization finds a very warm reception. Nikon will probably sell a lot of these lenses.