At 28mm, the lens behaves pretty much as we've come to expect with Nikon's VR system, giving somewhere in the range of 2.5 to 3.5 stops of improvement. What would normally take a shutter speed of 1/30s to get a blur-free shot can be shot at just 1/4 of a second - and half of the time, 1/2 of a second. 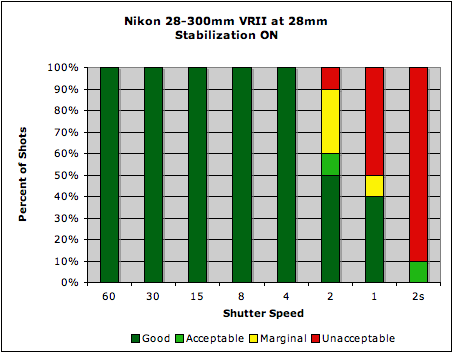 On the telephoto end, if we judge just by how long it can deliver "good" or "acceptable" results, the difference is barely a stop. If we decide to accept "marginal" results, though, it produces around 4 stops of stabilization. 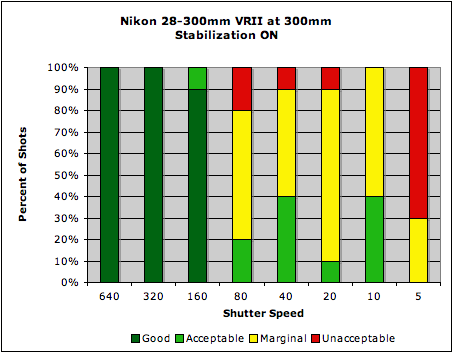 We think the "acceptable" threshold may in fact be relevant for this lens, ironically because of its softness starting out. We set our thresholds for the categories based on incremental blur above the baseline for the lens on a tripod. When you start out with less well-defined edges on objects, the same amount of incremental blur that would stand out on a really sharp lens doesn't look as bad compared to a soft lens' results on a tripod. So, at 300mm, this is a relatively soft lens that gets more blurry fairly quickly at slower shutter speeds. BUT, if you can tolerate a fair amount of blur, it'll deliver usable images down to incredibly long exposure times, rather than suddenly losing it 2 or 3 stops out.