The lens offers a variety of technical innovations, but the main attraction is its Phase Fresnel lens element, which eliminates the need to use a complicated arrangement of lens elements to correct chromatic aberration and reduce flare. Fewer elements means less weight and less required space to house them.

The lens is fully compatible with DX sensor bodies like the D7000, on which the lens provides an effective field of view of 450mm. The lens ships with a round hood, and is available now for around $2,000.

Sharpness
For a $2,000 lens, people are going to expect a lot from the Nikon 300mm ƒ/4 PF; it does live up to the expectations. It provides images of excellent sharpness, and interestingly it is optimized for shooting at the ƒ/4 setting: sharpness degrades slightly as the lens is stopped down.

Results for sharpness are more obvious on the sub-frame (DX) camera bodies, where the image is focused on the central (and best-performing) part of the lens. On the full-frame D800e body, we note that the sides are slightly less sharp than the center. It's also worth noting again that stopping down doesn't improve the results for sharpness: it's very good, but the 300mm ƒ/4 PF doesn't achieve the tack-sharp results we've seen in other lenses.

Diffraction limiting begins to set in at ƒ/11, but it's more noticeable at ƒ/16 where generalized softness is visible across the frame of the image. It's possible to stop the image down to ƒ/32, but at this setting we see a noticeable impact on sharpness.

Chromatic Aberration
The test results for the Nikon 300mm ƒ/4 PF with regard to chromatic aberration were very impressive - the lens is highly resistant, on both of our Nikon D7000 and D800e test bodies, across all apertures.

Distortion
There's essentially no distortion to speak of when using the 300mm ƒ/4 on the D7000. On the full-frame D800e, there is a tiny touch of pincushion distortion in the corners, but not enough to get excited about.

Autofocus Operation
The 300mm ƒ/4 PF uses an AF-S designation and is relatively fast to autofocus, racking through its close-focus to infinity distance and back, in just over one second. Our testing shows that the lens focuses mechanically. The filter ring of the lens does not rotate while focusing, and the lens is also very quiet during focus operations; as well, full-time manual focusing is available, by just turning the focus ring at any time.

Macro
While the Nikon 300mm ƒ/4 PF isn't the first lens you'd think of for macro work, it's not to shabby in this department. With a minimum close-focusing distance of 1.4m (around 4 1/2 feet), the lens provides a magnification ratio of .24x. The lens is also compatible with all of Nikon's standard teleconverters.

Build Quality and Handling
The real story behind the 300mm ƒ/4 PF is its innovation in comparison to the previous 300mm ƒ/4 AF-S: it weighed 1,440 grams (over 50 oz) and was three inches longer than the new PF version. The previous lens wasn't as complicated, however: it used only 10 elements in 6 groups, where the new PF version uses 16 elements in 10 groups. In the following lens block diagram, the green element is the Phase Fresnel element, and the yellow is the ED element. 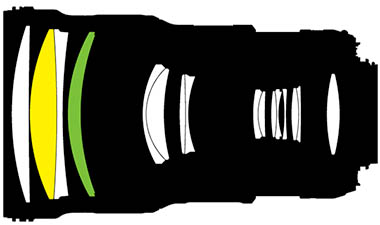 The 300mm ƒ/4 PF is well-built, with durable plastic components and a metal lens mount. A rubber gasket shrouds the lens mount, protecting the lens from dust and moisture. The lens barrel is composed of a black semi-roughed finish, and the rubber focus ring shows a ridged pattern that is easy to grip. The lens features nine rounded diaphragm blades to make up the aperture for pleasing out-of-focus results. Nikon also uses a new aperture control system (the "Electromagnetic Diaphragm Mechanism") which replaces the swishy mechanical control lever that you've seen on the back of every Nikon lens. We've done some testing and can confirm it will work on Nikon cameras back as far as about 2007.

Some concern has been noted about the Phase Fresnel lens element producing an odd bokeh, or poor performance with regard to lens flare: here are our lens technician Rob's comments from shooting his sample photos with the lens. "Flare is not an issue on this lens. Even with the lens hood off I did not see any odd reflections from the PF element." Regarding bokeh, here is a sample image which will give you an indication of how it performs. 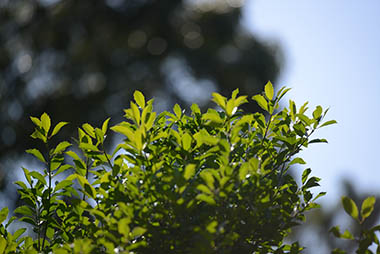 The lens bears a distance scale that is recessed and windowed, its markings set in feet and meters. There are no depth-of-field or infrared index indicators. There are three main switches on the side of the lens: autofocus control, focus limiter, and vibration reduction control. Autofocus control obviously allows the user to disable autofocus operations on the lens (marked somewhat confusingly as "A/M | M/A | M"). The focus limiter is set for 3m, allowing the user to limit focus between minimum focus distance and 3m. Finally, the vibration control function is a little different than we've seen in previous Nikon lenses. The VR switch now combines the Normal and Sports modes as well as OFF into its function. On other Nikon lenses, normally when the VR switch is set to the left it turns VR on. This position will turn VR off on this lens. Just be aware it may not be like your other lenses.

The focus ring is an inch wide, with raised rubber ribs for texture. The ring turns nicely; it is well-dampened, if just slightly stiffer than necessary. There are no hard stops at either close-focus or infinity, though there is a slight increase in resistance to let you know you've reached a limit.

The lens ships with the HB-73 lens hood, a circular-style bayonet-mounted hood that adds 2 1/2 inches to the lens' overall length when mounted. The lens reverses for storage on the lens. An optional RT-1 tripod collar is available for the lens for approximately $170 (this collar is also compatible with Nikon's 70-200mm ƒ/4 lens).

Nikon claims to provide four and a half stops of hand-holding improvement, which is an impressive claim: our testing backs this up. Check out our IS Test tab for greater detail.

Finally, Nikon had some issues on the first lenses having a problem using VR at certain speeds on certain cameras (D800, D800E, D810, or D810A). There is a fix for it. The vibration reduction on our review copy of the lens worked perfectly, so it must have been fixed before we received it. A firmware update is available for users who are affected by this problem. For more information, visit this Nikon Support Page.

Nikon 300mm ƒ/2.8G ED AF-S VR II ~$5,000
This was the original choice if you needed Vibration Reduction in a 300mm focal length; it also got you all the bells and whistles Nikon could offer, as well as a ƒ/2.8 aperture.

Conclusion
It's nice to see innovation hard at work, and the resulting reduction in size and weight is welcome for users who were tired of lugging around the 3+ lbs. 300mm ƒ/4 AF-S. If there are any shortcomings with the new PF version, it is that it is not capable of the tack-sharp results we've seen in other Nikon offerings, but on further analysis of the numbers, the results are still very sharp indeed.