SLRgear Review
May 7, 2008
by Andrew Alexander

Announced at PMA2007 and released near the end of that year, the 200mm ƒ/2.8 DA* is the third version of this telephoto prime released by Pentax since 1984. The DA* incorporates the latest technology available from Pentax, most notably the SDM (''Supersonic Drive Motor'') autofocus system, bringing it on par with other major manufacturers.

The 200mm ƒ/2.8 DA* is a designed-for-digital lens, offering a 300mm equivalent field-of-view when mounted on a Pentax digital SLR camera. You may see some hard vignetting if you try to mount it on a K-mount film SLR. It also doesn't have an aperture ring, common for newer lenses, so your film body would have to be able to set lens apertures to work correctly.

Sharpness
The 200mm ƒ/2.8 is a very sharp lens, never exceeding 2 units on our blur scale. However, at ƒ/2.8, it has the dubious distinction of being one of the few lenses that we have tested to show more sharpness in the corners than in the center. Specifically, the corners hit about 1.5 blur units, and the center hits 2. This performance is limited to ƒ/2.8; at ƒ/4, image sharpness becomes more flatly distributed, at about 1.5 blur units across the frame. Sharpness improves to its optimal performance at ƒ/5.6, where the lens produces essentially tack-sharp images across the entire frame. This sharpness trend continues through to ƒ/11, and by ƒ/16 diffraction limiting begins to set in, although you'd be hard-pressed to see any visible difference. By ƒ/22 we're back to 2 blur units, evenly shown across the frame.

Overall, this is excellent performance, marred only by odd exception at ƒ/2.8 whereby the center is marginally softer than the corners. Happily, this difference is only one-half of a blur unit, so in real-world applications you're unlikely to see it.

Chromatic Aberration
The lens' tolerance to chromatic aberration is commendable, with fringing pixels never exceeding 3/100ths of a percent of frame height in the corners. Average (central) performance is half that, which means you would have to peep very hard to see evidence of CA.

Shading (''Vignetting'')
Corner shading is only a slight issue for the Pentax 200mm ƒ/2.8. When set to ƒ/2.8, we note the corners are a quarter-stop darker than the center. At all other apertures, there is no evidence of corner shading.

Distortion
The 200mm ƒ/2.8 earns top marks for its complete absence of distortion.

Autofocus Operation
The 200mm ƒ/2.8 focuses very quickly, but for a sonically-focused lens, it is surprisingly loud when racking completely through its focus range. Point-to-point focusing, by comparison, is relatively quiet. The lens employs Pentax's quick-shift technology, meaning you can override autofocus results at any time by just turning the focus ring.

Build Quality and Handling
The 200mm ƒ/2.8 is very solidly built, with pro-quality features like weather seals, a nine-bladed aperture diaphragm and a metal lens mount. The lens features a windowed and recessed distance scale measured in feet and meters, as well as a switch to disable autofocus operation on the lens. The lens isn't physically long enough that it needs a separate lens-mounted focus button. It is fairly heavy in comparison to the smaller Pentax bodies, making the body/lens combination fairly front-heavy; you'll find yourself lifting it from the rear of the lens when attached to the camera. I think a mount for separate attachment to a tripod could have been useful for this lens, but Pentax obviously has faith that their venerable K-mount will stand up to any strain the lens might produce.

The only feature of any consequence is the focus ring, which dominates almost half the body of the lens. At 1 1/4 inches wide, with a rubberized ribbed texture, it provides excellent tactile feedback for manual focusing operations. There's no shortage of ''play'' for manual focusing - the ring turns almost 270 degrees from close-focus to infinity and is very smooth to the touch. While your mileage with regard to autofocus performance will vary depending on the body used, it's worth noting that when Dave had it out shooting some sports with the K10D, he had difficulty achieving consistent focus from shot to shot.

The other thing Dave noticed during his sports shooting were some very odd results for bokeh (the way out-of-focus areas appear in the background of a photograph). We don't yet have a standard test to evaluate bokeh, and it's something of a subjective measure anyway, but I'll just let you decide on how objectionable the following results would be. 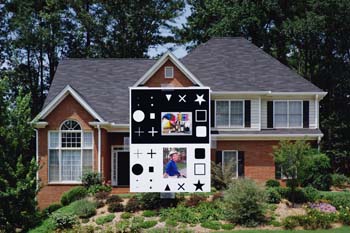 This image is our first attempt at a test chart, designed with a variety of shapes to evaluate how the target goes out of focus. So you understand what you're seeing, this is a chart taped to a poster, shot from a distance of 26 feet. To evaluate how the chart goes out of focus, we stepped back in one-foot increments without adjusting focus. For a better view of the chart, click on this image. 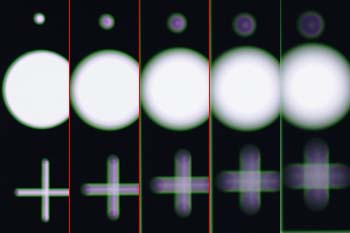 This is a compilation of the test chart images as we backed off from the in-focus distance of 26 feet, to 27-31 feet distances. What's unusual about this bokeh is the green and purple fringing that really draws attention to the out-of-focus elements.

There are a few possibilities concerning the lens' bokeh performance, but in the final analysis we present this information without judgment so the reader may be better informed.

The last point concerning the build quality of the 200mm ƒ/2.8 is the truly magnificent lens hood; a full 3 1/4 inches long, almost as long as the lens itself, with the nice Pentax touch of a removable window that allows access to turn a polarizing filter. The filter rings are plastic, and an attached polarizer won't rotate during focus operation.

There isn't much in the way of alternatives if you're considering this lens, and unfortunately, for those we do list, we haven't tested any.

Pentax 200mm ƒ/2.8 IF SMC P-FA ~$900
The previous Pentax offering was fully compatible with 35mm full-frame film cameras, with about the same specifications for size and weight. It did come with a separate tripod mount and equally large lens hood, but is mechanically focused. Close-focusing and macro results are inferior to the DA* version.

Pentax 80-200mm ƒ/2.8 ED IF SMC P-FA ~$1300
This older Pentax zoom design is another alternative to getting to the 200mm focal length. The lens was also noteworthy for featuring Pentax's underreported power zoom function.

Sigma 180mm ƒ/3.5 EX DG IF HSM APO Macro ~$700
The only third party manufacturer design that approaches the ''fast 200mm'' application, the Pentax version of the lens does not feature HSM. However, the lens boasts a full 1:1 magnification ratio, making it superb for macro application.

Conclusion
For telephoto zoom lenses in the current Pentax lineup, only the 300mm ƒ/2.8 DA* goes longer. The 200mm ƒ/2.8 boasts excellent results for sharpness, chromatic aberration resistance, corner shading and shows absolutely no distortion; in the lab, the lens is a real winner. In the real world however, we had issues with autofocus performance (which, in all fairness, isn't easily blamed on the lens) and more importantly, objectionable bokeh. While these issues are worth knowing about they don't substantially undermine the overall performance of the lens, and I wouldn't have a hard time recommending it.

Note: we also have an additional sample issue showing the bokeh issues with this lens as detected in the field.