If you've been holding your breath waiting for an app that does photo ebooks on the iPad, you can now exhale. 58 North has just released Pholium, with which you can create and publish your own photos in an ebook.

We gave it a try yesterday and had a ball. It's elegant interface makes it easy to use and gets out of the way so you can play with the images you place on the pages of your ebook.

So it didn't take us long to put together a book of about 20 surfing images and publish it to a few of our more aquatic friends.

Pholium won't make you rich or famous, though. To see why, read our review, in which we reveal all.

Create, edit and gift professional-grade digital photo books all within the app

DALLAS -- April 4 -- 58 North, creators of premium iPad applications leveraging Apple's iOS 5, today announced the launch of Pholium, a photo enthusiast's dream digital book design and giving app for the iPad, developed by Bottle Rocket Apps. Available today in the App Store, Pholium elevates the way iPad users interact with images by enabling the creation of high-quality, customizable digital photo books that can easily be given to others. Unlike existing apps, Pholium enables users to create digital books for free, fine-tune images and gift the completed photo books to others, all on the iPad and all within the app. Using a WiFi connection and Pholium's in-app giving feature, Pholda, the app allows users to share the highly customized and interactive digital book experience with others. 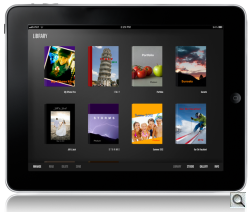 A Library of Pholium Titles

Pholium took full advantage of the iPad's capabilities, allowing individuals to become both authors and publishers by creating and sharing their ideas visually. Pholium is designed to provide a rich and immersive experience that goes beyond today's online photo sharing and point-click-print photo books. Using only the iPad, users have an opportunity to create the highest-quality digital photo books that can be easily given to others for a fraction of the cost of a printed book. Book recipients who use Pholium receive instant push notifications the moment new books are available to them and may be downloaded directly to their iPad via WiFi from Pholium's cloud server.

Utilizing the existing iPad image library, users effortlessly select and place photos in a custom layout, creating a personal story from cover to cover. With the flick of a wrist, users of Pholium can fine-tune images and make adjustments within the app, including size, color, contrast, brightness and finish of their photos. Additional features allow users to determine how images are laid out on each page, customize the cover, write an introduction or author/artist statement and add finishing touches. The end result is the highest-quality, professional-grade digital photo book complete with page curling and iPad optimized image viewing. By tapping on any image within the book, users can view images up to 2x and also have the option of viewing the digital book in a slide show format.

"We're reinventing the way iPad users think about their images. We take many photos daily but some are special and deserve to be preserved and shared -- whether it's to tell a story or remember an important event. As a longtime photographer, I was thrilled by the possibilities that the iPad offered for presenting and sharing images," said Robert E. W. Sinclair, co-founder of 58 North. "I soon realized there weren't any apps or e-book formats taking advantage of the device's high-quality graphics, functional capabilities and portability. Pholium is changing that. Creating a Pholium e-book is as easy as saving images into an iPad and the app and sending them to friends and family -- from anywhere."

• Gallery. An efficient place to import, edit and store the user's selected images within the app. Images in the Gallery can be organized and named in Stacks for easy identification.

• Studio. The center of creativity and space within Pholium where the possibilities begin for the user to build their idea in a book format. The Studio allows users to create digital photo books to peruse and gift to others.

• Library. Where completed Pholium books are stored -- similar to Kindle or iBooks -- and can be enjoyed by the creator or given to other iPad users via Pholium's in-app giving feature, Pholda. Pholda is unique in that the book is permanently given to the recipient and built into the app. The digital photo books are given using Pholium's cloud server to retain its high image quality.

"We worked from the ground up to maximize the iPad's features, while staying true to the look and feel of traditional coffee table photo books," said Bill Sinclair, co-founder of 58 North. "The simplicity and elegance of the iPad really shows off a user's unique style and design. With Pholium, your creativity can flow."

"Pholium is an app we can all use," said Calvin Carter, founder and president of Bottle Rocket Apps. "It's both powerful and simple, allowing amateurs and professionals alike to build a beautiful and meaningful record of the most important images of our lives."

Pholium is available for $9.99 from the App Store on the iPad at http://www.pholium.com/appstore. This price includes the creation of an unlimited number of books and the ability to give each book to up to 10 recipients for free using Pholium's in-app giving feature, Pholda. Additional Pholdas are available for $0.99 each and enable users to give each digital photo book to up to 10 new recipients. A low-resolution PDF of gifted digital photo books is also automatically created for non-app users.

58 North is the creator of premium applications that leverage Apple's iOS 5 and the iPad's unparalleled capabilities as a publishing and content consumption platform. The company works with leading high-end application developers to develop its iPad apps. 58 North is led by uncle and nephew duo Robert and Bill Sinclair, both successful entrepreneurs and amateur photography enthusiasts. Named for the parallel running through the Caithness region of Scotland where the Sinclair clan originated, 58 North was founded in 2011 and is headquartered in Dallas, Texas. http://www.pholium.com