Previous Story Chase Jarvis shares 6 things to do every morning to kickstart your creativity
Next Story Clash of the titans: GoPro puts DJI on notice with impressive first footage from its prototype drone

Great shots: Scott Robert Lim on why “Posing is a process” We've all seen stunning wedding, fashion, or portrait shots like the one shown here, but we rarely if ever get to hear just what goes into creating them. Here's the story of this one.

Wedding photographer and Sony Artisan Scott Robert Lim created this captivating image by posing his subject inside a tunnel near the Sky Temple in Beijing, China. By using available light, shallow depth of field, careful composition and posing, and his rapport with the subject, he was able to craft an intimate portrait with a sense of place in the midst of a crowded tourist destination. Lim talked with us about how he did it:

“There was just the natural light coming in through that tunnel, which narrows the light. The entrance of the tunnel is like a huge softbox, so when it comes in and gets diffused, it’s this big, beautiful light that slams into your subject. 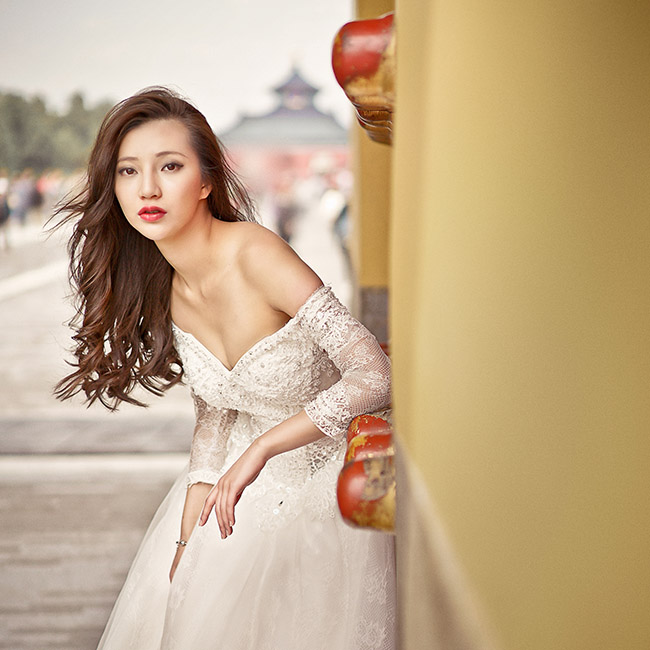 Click to see a larger version of this gorgeous photo, then expand your browser window to see it full-screen.

How Scott got the shot.

Expand your browser window to see this image full-screen

The exceptional dynamic range of the Sony a7S really shows in this shot, with perfect preservation of detail from the brightest highlights into the deepest shadows. In between, the tones are lush and full, the subject's skin tones rendered with delicate gradation.

This content was made possible by support from Sony's Artisans of Imagery program.

From a compositional point of view, I was framing the person but using elements where there weren’t any people too. I also had to give the feeling that I was in China, so I had to have something in the background that looked like it. If I’d just put her against a yellow wall, it might have been a great shot, but you’d say, ‘Where is it?’ When you’re getting paid to shoot in exotic locations, you have to show those exotic locations too.

Posing is a process. Every detail is orchestrated by me. People—even if they’re models—don’t naturally stand in the most perfect position. They can’t see themselves. So it was kind of an evolution of micro-adjustments to get the shot, working with her and making her feel good, because if she’s not feeling comfortable, she’s not going to give that look. That’s why you need to communicate. Portraiture is so much about having that relationship.”

This is the first of a series of Great Shots articles, each offering a look inside the creative process of an extraordinary photographer.

This content was made possible by support from Sony's Artisans of Imagery program. Want to see more from Scott Robert Lim? Head over to Sony's Alpha Universe.

Tweet
Comment
Previous Story Chase Jarvis shares 6 things to do every morning to kickstart your creativity
Next Story Clash of the titans: GoPro puts DJI on notice with impressive first footage from its prototype drone