Bringing the past into the future: Ian Ruhter works from within his camera to create one-of-a-kind collodion photographs 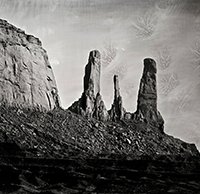 For Ian Ruhter, photography is a very hands-on activity. He captures photographs using a wet plate collodion process. Wet plate collodion photography began in the mid-19th century. The nature of the process requires that images must be exposed and developed in a matter of minutes, or else the collodion will dry. As he is a landscape photographer, this means that he must have a portable darkroom. In his case, his darkroom is a converted delivery truck.

Ruhter's truck is not just a darkroom, however, it's also his camera. While wet plate photography has often been done using small, hand-held plates of glass or aluminum, he builds his own plates up to 48 x 60". Ruhter is the first photographer I've heard of that drives his camera around.

"The game-changing moment came when I realized I could be the camera. I could be the mechanics of it," he says. He is in control of the shutter, the chemical process, and he makes the "film." Rather than being external to the camera, he works from within the camera itself.

Impossible was a word used by many in the beginning . Offten we never try because of the fear of failure or the possablilty of success can hold us from turning our dreams into reality . We must remember that when we work from our heart and follow our dreams anything is possible. #mondayvibes #followyourdreams #silverandlight @ian_ruhter @lvance2010 @cs_k Post by Will

A photo posted by @silverandlight on

What some may view as an imperfect process, Ruhter views as a way to become truly involved in the creation of his art; he creates each photograph by hand. The chemicals capture more than just the scene, however, they also capture moisture in the air and dust. Temperature changes and wind affect the images as well. Ruhter captures a moment in time with more depth than is possible using modern camera equipment. His plates are truly unique and each imperfection is "…so beautiful that you wouldn't change [it] if you could." The Lake Tahoe-based photographer has driven his camera to Yosemite, Monument Valley, and other places throughout the American West. His work, along with the work of other artists who have travelled the West, is on exhibit at the Danziger Gallery in New York City. Running until December 19th, this is Ruhter's first exhibit in New York City. The show includes original collodion plates and pigment print reproductions. For more information on the exhibit, see here. To see more of Ian Ruhter's work, see his website.

As an added bonus, check out the video below to see Ian Ruhter and Will Eichelberger work in Yosemite.

(Seen via the New York Times. All images shared with the permission of Ian Ruhter. Index image: "The Sisters")