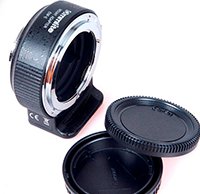 Commlite has introduced a Nikon F-mount to Sony E-mount autofocus adapter. Available on eBay for $329 USD, it's set to begin shipping in mid-December. The adapter is quite small, weighing in at only 250 grams and it even has a 1/4" hole for tripod support.

This new adapter is compatible with Sony's NEX-5N/5R/5T, A6000, A7/A7R/A7S/A7 II/A7R II/A7S II. The A7 II, A7R II, and A7S II cameras provide phase detection AF support for adapted Nikon lenses as well. When using a Nikon F-mount lens on a Sony E-mount camera via the adapter, you will have access to full EXIF readings, have aperture control, vibration reduction, and teleconverter support in addition to autofocus capabilities. Check out the video below from Matt Granger to see his thoughts on a pre-production version of the Commlite F- to E-mount adapter. His initial impressions are rather negative, but keep in mind that the adapter he used was pre-production and this was before Sony's major firmware update.

The prospect of using Nikon lenses on Sony mirrorless cameras such as the A7R II is very exciting, so I hope that the issues Granger experienced have been fully sorted out.