Ansel Adams through his son’s eyes 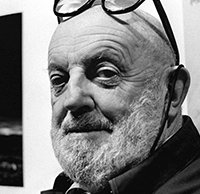 The Booth Western Art Museum in Cartersville, Georgia is currently hosting an Ansel Adams exhibit through March 20th. The exhibit, Ansel Adams: Before & After, displays his work amongst the work of "predecessors, peers, and contemporary photographers."

Atlanta's NPR Station, 90.1FM WABE did a story about the exhibit and interviewed Ansel Adams' son, Michael Adams. Having been with his late father when he created much of his work, Michael is able to share an interesting perspective on the creation of some of Ansel's famous imagery.

Recalling the capture of White House Ruin in Canyon de Chelly National Monument, Arizona in 1942, a young Michael was taken out of school to go out into the field with his father, he says "It's a stunning image of this sandstone wall with the water scarring on it and the ruin against the very black background. We had to climb down into the canyon and wade the river to get over to take this picture. It was stunning. I remember the heat more than anything else because we had to walk back through the river and climb to the top with all of his big cameras." While Michael's friends' fathers were playing catch with them or taking them to sporting events, Ansel was taking Michael on trips. Michael was able to see much of the west through Ansel's eyes.

Michael was also present when Ansel captured perhaps his most famous image, Moonrise, in 1941 in New Mexico. Ansel saw the image in his mind and pulled the car over to capture it. After unloading all of the gear, he realized that he didn't have his light meter. However, he knew that the luminance of the moon was 250 foot-candles and was able to derive his exposure. Referring to the work done on the image in the darkroom, Michael says that Ansel highlights the foreground, diminished the number of clouds in the sky and darkened the sky to create more drama, and changed the brightness of the clouds and the moon.

His artistry in the darkroom and his distinct, high-contrast style helped photography become more seriously viewed an art form. Ansel Adams was not simply taking photographs, but instead creating photographs. As Michael says of his father's artistic goal, "it isn't what you see, it's what I want you to see."

(Seen via WABE. The portrait of Ansel Adams by J. Malcolm Greany seen above is part of the public domain.)