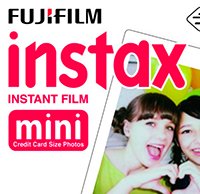 Amazon has released their sales results from the holidays.

While there are some staggering results, such as Amazon shipping more than 200 million items via free Prime shipping this holiday season and over three million people joining Amazon's Prime service during the third week of December, perhaps the most surprising tidbit is that Fujifilm INSTAX Mini Instant Film was the biggest-selling item from Amazon's camera department.

Fujifilm INSTAX Mini Instant Film is an ISO 800 color film that is designed for use in their Instax cameras, such as the popular Instax Mini 8 camera.

In a holiday season that saw consumers offered a wide variety of great deals, it is somewhat surprising to see film topping the list of best-selling camera products given digital's domination nowadays. However, as was seen in August, despite Fujifilm ceasing production of a variety of film products, their Instax camera line has managed to do very well, with sales volume for the line increasing every year since 2007, reaching nearly 400 million units in 2014. Many photographers may have already gone digital, but the success of Fujifilm's Instax line goes to show that film can not only survive, but in some cases actually do really well and even grow.