Previous Story A fiery start to the new year for a photojournalist in Dubai
Next Story Lensless cameras and HDR sensors: Computational photography may change everything 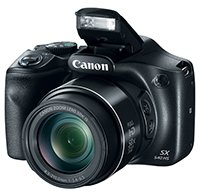 Canon has announced new PowerShot cameras, a new SELPHY printer, and new VIXIA camcorders ahead of this year's CES expo in Las Vegas. Improving upon the SX530 in multiple important ways, the SX540 HS's 20.3-megapixel sensor bests the 16-megapixel sensor found in the SX530. The SX540 also uses a better image processor, the DIGIC 6, whereas the SX530 used a DIGIC 4. Video fans will also be pleased to know that the SX540 HS can record 1080/60p video improving upon the SX530, which was capped at 1080/30p. The new super zoom also has intelligent image stabilization and a new Zoom Framing Assist Lock function, which uses image stabilization to help keep the subject centered in the frame. There is also an improved auto-zoom function, which uses facial recognition to automatically zoom in for the desired portrait (face, upper body, or whole body). The new Story Highlights feature allows the user to make still and video compilation recordings that can even have music added. The SX540 HS will be available in March for an estimated retail price of US$399.99.

The new and more affordable Canon PowerShot SX420 IS camera is much more compact than the previous model, has an ergonomic hand grip, built-in flash, 24-1008mm-equivalent lens, DIGIC 4+ image processor, and a 20-megapixel CCD image sensor. The 42x optical zoom (compared to the 40x optical zoom of the SX410 IS) SX420 IS camera also has built-in Wi-Fi and NFC. It can record 720p HD video in MP4 format, allowing it to easily share video over Wi-Fi. The SX420 IS has a 3" LCD screen with approximately 230,000 dots and an eco mode to improve battery life. The SX420 IS will be available in February for US$299.99. The Canon ELPH 180 and Canon ELPH 190 IS both use a 20MP CCD sensor, but they vary in other capabilities. The 190 IS includes a 10x optical zoom, whereas the ELPH 180 opts for 8x optical zoom lens. The 190 IS is Canon’s most affordable Wi-Fi-capable camera, but they’re both capable of recording 720p video and have digital image stabilization. The ELPH 180 and ELPH 190 IS will be available in February for US$119.99 and US$159.99 respectively. Sitting at the top of the ELPH-series lineup, the Canon ELPH 360HS camera is an ultra compact camera with 12x optical zoom, intelligent image stabilization, built-in Wi-Fi and NFC, a 20.2-megapixel CMOS sensor, and can record up to 1080/30p video. Using its DIGIC 4+ Image Processor, the ELPH 360 HS can deliver great image quality even in low light situations. The ELPH 360HS will be also be available in February with an estimated retail price of US$209.99 and it comes in silver and purple finishes. Canon’s new SELPHY photo printer, the CP1200, replaces the SELPHY CP910 and will be available in both black and white finishes and costs US$105.99. The CP1200 uses the same P64 ink cartridges as the CP910 does, has an optional detachable battery that allows for up to 54 prints to be made on-the-go, compared to the 36 prints that the previous model was capable of, and offers 43 different effects via plug-in. Further, the SELPHY CP1200 has a direct Wi-Fi button and offers wireless printing from both mobile and tablet devices. Like the CP910, the new CP1200 printer is capable of making both credit card and postcard-sized prints as well as borderless 4 x 6” photo prints.

Canon has also expanded their VIXIA camcorder lineup by announcing the HF G40, R72, R70, and R700 camcorders. The HF G40 has 20x optical zoom capabilities and 5-axis dynamic image stabilization. It can record up to 1080/60p video and features a 3.5" OLED touch screen, a tilting electronic viewfinder, and has dual SD card slots. The HF G40 will be available in February for an estimated retail price of US$1299.99. Varied in their internal memory and wireless features, the new HF-series R72, R70, and R700 camcorders all feature the same 3.28-megapixel Full HD CMOS Canon Image Sensor, 57x Advanced Zoom, SuperRange Optical Image Stabilizer, DIGIC DV4 Image Processor, improved 3" capacitive touch panel LCD display, and new user interface. The R72, R70, and R700 camcorders are priced at US$449, US$399, and US$299 respectively and will be available in February.

Tweet
Comment
Previous Story A fiery start to the new year for a photojournalist in Dubai
Next Story Lensless cameras and HDR sensors: Computational photography may change everything