Previous Story You can’t see me, but I am in this photograph
Next Story How well do you understand curves? Find out with this quiz

Past meets present: Attaching a lens from 1880 to a Sony A7 II produces surprisingly good results! 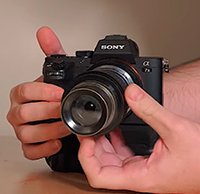 French photographer Mathieu Stern is back with yet another video in his "weird lens challenge" series.

If you missed my coverage of his previous weird lens challenge videos, you can see the first one here where he attached a 120mm f/6.3 folding camera lens from 1910 to his Sony A7 II.

In this second video, he's attached a "bokeh monster" Russian-made Jupiter-9 85mm f/2 lens to his A7 II. You can see that video here.

This time the lens is even older, hailing all the way from 1880. The simplistic, metal, large-format lens actually provides pretty sharp and impressive results. In the video below, Stern's sixth in his "weird lens challenge" series, you can see the lens and the process Stern had to go through to attach it to his Sony A7 II. Stern first had to add strips of cardboard to be able to fit the lens in an M42 ring mount. He then added macro and helicoidal tubes to be able to focus the lens, and was then able to mount it on his A7 II.

Check out the video below to see the lens in action!

Tweet
Comment
Previous Story You can’t see me, but I am in this photograph
Next Story How well do you understand curves? Find out with this quiz