Unique (and beautiful) underwater photoshoot promotes the protection of sharks 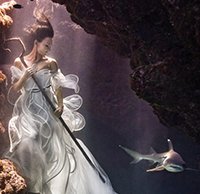 Photographer Benjamin Von Wong recently went to Fiji to photograph sharks in such a way that would "promote their beauty while advocating for their protection."

Sharks are often portrayed as dangerous, vicious animals, and Von Wong wanted to flip the script by creating a series of images that showed sharks and a human peacefully coexisting. To do this, he needed a model to be tied down underwater while sharks swam around her. This created a problem, however, as he "didn't know anyone in Fiji that would help me tie down a model while sharks swam around."

It wasn't until a few days after he had arrived in Fiji that Benjamin's vision started to have life. Tourism Fiji and the Barefoot Collection provided a full team of support divers, an in-house marine biologist, as well as shark expert Thomas Vignaud. Shortly thereafter, Von Wong was hard at work bringing his "shark shepherd" vision into reality and promoting shark conservation and the creation of a shark sanctuary.

See the video below for a look at this cool project!

Von Wong cares deeply about sharks and the ocean's ecosystem, as you can tell from the video. He says, "Sharks are the shepherds of the sea and essentially make sure that everything flourishes. The more sharks in an area, the greater the fish population and these all work together in beautiful harmony to ensure a healthy, diverse sea life and ultimately help maintain the balance of the underwater ecosystem." You also get to see the challenges associated with this photo shoot. Oxygen is limited, the water is cold, and communication is very difficult. On top of that, they're working with wild sharks, so they need the sharks to be in the right location as well to capture the images. The light rays were only visible from 11 AM to 1 PM each day, so that added an additional time constraint to the shoot. Von Wong called upon champion freediver Amber Bourke for this shoot. She wore a specially-designed white dress that was made by Ali Charisma. In total, Bourke had to wait underwater, tied down, for six hours over the course of three days. For more information on the photo shoot, see here.

To sign a petition campaigning for the protection of sharks (which are currently on the path to extinction due to human action) through a "No Shark and Ray Kill Policy and the Creation of a Malaysian Shark Sanctuary," click here.