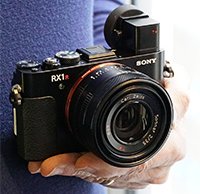 Sony has issued an advisory notice for their Sony DSC-RX1RM2 camera due to an apparent light leak through a specific range of serial numbers.

According to Sony's advisory, for the affected serial number range it has been found that "in rare bright conditions, some of our DSC-RX1RM2 cameras may produce image files with unwanted light." This advisory applies to RX1R II cameras with a serial number from 6310198 to 6311127.

Further, Sony states that if your RX1R II does not fall within the above serial number range, they can "assure you that your camera will not present the symptom described above." After originally releasing the RX1R II in November, Sony halted shipments of the RX1R II in Japan and stopped sending new stock to the US. It is being reported that the RX1R II will start shipping again on February 19th. The RX1R II looks to be a fantastic camera despite this issue, as you can read about in our Field Test Part I. It was also awarded our "New Technology of the Year" award for its variable low pass filter technology. You can rest assured that if you pre-order the RX1R II through one of our trusted affiliates, Adorama, Amazon, or B&H, that you will not likely experience the issue described above.