A jet ski, the right strobe and a Nikon D810 = nighttime surf photography! 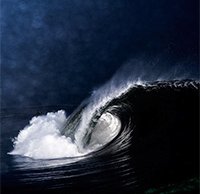 Two years ago, Australian photographer Steve Wall decided to try to photograph the ocean using artificial lighting. He had an image in his mind of a brightly-illuminated wave against a dark backdrop, but achieving this image proved to be difficult and required creativity on his part.

With a range of custom built cables and retrofitted watertight cases, he was good to go. He wanted to photograph surfers and bodyboarders after sunset, but he also wanted to capture empty waves as well. Getting high-powered artificial lighting out onto the ocean via jet ski can be difficult enough, and to have to do that and capture images in dark conditions added an additional layer of challenges to the shooting. Steve called upon his friend, Dom Dixon to help him out on the water.

After much research, Wall settled on a Elinchrom Ranger RX Speed AS flash head. When looking at different flash systems, he was disappointed to find that you often have to make a compromise between power or flash duration. Flash duration is often listed at t0.5, but a “general rule of thumb is to divide this figure by three and you have the t0.1 time which better reflects any given strobe’s ability to freeze motion.” Unless starting with a t0.5 time of 1/1,500s, Wall states that it can be difficult to freeze motion, particularly when using a strobe as the primary source of light.

A photo posted by @whereswalle on

For camera equipment, Wall previously used a Nikon D3S, but recently upgraded to a Nikon D810 for the higher resolution and dynamic range. To keep the camera gear safe out in the water, he uses Aquatech underwater housings which provide full control over the gear.

A photo posted by @whereswalle on

When preparing to go out on the water for a shoot, Wall is looking at swell size, direction, tides, wind, and the overall weather. When the conditions look promising, he heads out after dark. With his lighting set-up refined, he’s looking forward to continuing his project and capturing more great images.

For more information on his lighting set-up and process, check out the full article that he wrote on Fstoppers. To see more of Steve Wall’s work, be sure to visit his website and follow him on Instagram.