Exploring a massive river cave with a drone 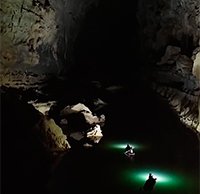 During a recent two-day kayaking trip on the Xe Bang Fai River in the Southeast Asian country of Laos, China-based photographer Ryan Deboodt navigated through the large Khoun Xe Cave. Instead of a typical camera, Deboodt opted for his drone, which allowed him to capture some stunning and dramatic images and video.

"Tham Khoun Xe is a river cave carved by the mighty Xe Bang Fai River and is located in Hin Nam No National Protected Area in central Laos," Deboodt describes in his video's description. "At 4.35 miles (7 kilometers) long and with an average width and height of 249 feet (76 meters) and 184 feet (56 meters) respectively, it is considered one of the largest active river caves in the world."

This isn't Ryan Deboodt's first foray into massive caves with a drone. Last year, he went to Hang Son Doong cave in Vietnam, the world's largest known cave. For this trip, he used a Canon 6D with a Canon 16-35mm f/4 lens for photography on the ground and a DJI Phantom 2 with GoPro HERO4 Black for aerial recording. You can see his video from Hang Son Doong below.