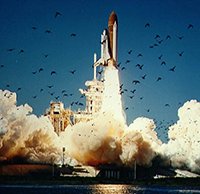 Photojournalist Red Huber of the Orlando Sentinel has captured images of shuttle launches for thirty years. He photographed astronauts during training and during photo ops; he got to know them. His close relationships with the astronauts he photographed made January 28, 1986 a day that he'll never forget when he was on assignment photographing the Challenger launch.

"It was bitter cold, and I was surprised they were going on with the countdown, I really was," says Huber of the morning of the Challenger space shuttle launch. As Huber stood set up with his camera, surrounded by other photographers, the Challenger shuttle lifted off and cleared the tower. And then with a puff of white smoke, everything went wrong.

"There were people beside me that had never seen a launch before and they said 'Oh wow isn't that cool!' Well, I knew right then that this was a disaster."

What made it especially difficult for Huber was that he knew these astronauts personally. As a photojournalist, he had to capture images of the Challenger as it exploded and broke apart 50,000 feet up in the sky. Huber says, "You can't let your emotions affect the photograph. Then, it becomes not a true moment. But I still captured from my angle what I saw."

Huber recalls how happy the astronauts looked that morning, how ready they were to go on their mission. "All the astronauts, every single one of them, I remember their faces so clearly and that's what is in my mind when I think about the Challenger disaster." For more information on Huber and his history of covering space shuttle launches, see this article from the Poynter Institute. For a photo retrospective of the Challenger from the Orlando Sentinel, see here.