Previous Story Should you ever give a client raw files? One portrait photographer says “no!”
Next Story “Goodbye powder flash…meet flash synchronization!” Honoring the man who invented it 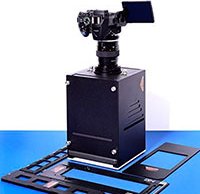 If you're a digital photographer looking for a quick and convenient way to digitize old film negatives, then South Carolina-based photographer Cecil Williams has just the invention for you, the FilmToaster.

This $1,699 system, which is the "world's first multi format film duplicator," allows photographers to use their digital camera to capture images of film negatives. The FilmToaster consists of a 6" x 6" x 9" rectangular metal box and a 5000K led interior lightsource. The "pitch black" interior minimizes reflections while the light is battery operated. The unit has five slots on each side that accept three included film carriers: 35mm film strip, 35mm slide, and medium format (120, 220, 2-1/4", 645, 6x7, and 6x9). The FilmToaster can also accommodate other readily-available film carriers.

You can orient the FilmToaster either horizontally or vertically for use on a desktop or with a tripod (there are three 3 - 1/4-20" tripod thread mounts on the unit). The FilmToaster connects to "all macro or closeup lenses via 52mm - 72mm connectors" and allows for the use of "DSLR or mirrorless camera body types." Williams, who has been taking images since 1947 when he was 9 years old, told The Times and Democrat, that he was concerned with how quickly some of his negatives were deteriorating, so he had to find a way to preserve them before it was too late and he lost all of his half-million to a million negatives. "I got to thinking about it. I said, 'Well, with today's digital cameras, why not take a picture of (the negatives)?' " He says that our culture requires someone to take the responsibility to do something to save it, or else we would eventually lose all of the history that has been captured on film. As the newly-appointed director of Historic Preservation at Claflin University, Williams will be working with work-study students to digitize his immense collection of film negatives.

In less than five or six seconds, his FilmToaster is able to capture the negative and convert it to digital. By having his unit rely only on a battery-operated light, it won't break or become obsolete any time soon. As of early January, Williams had sold 63 FilmToasters over the course of five months. They're available on Amazon, eBay, and the FilmToaster website.

Tweet
Comment
Previous Story Should you ever give a client raw files? One portrait photographer says “no!”
Next Story “Goodbye powder flash…meet flash synchronization!” Honoring the man who invented it