Photographer has work stolen, is then harassed for not being okay with it 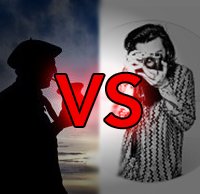 Belgian photographer Ezequiel Scagnetti found himself in a difficult situation over the past weekend. Scagnetti was subjected to harassment and people flooding his photography business with negative reviews all because famous pop star Harry Styles stole one of his photos and posted it to his Instagram account.

Styles, who has nearly 16 million followers on Instagram, posted this photo of traditional Burmese boxer, Saw Zaw Lwin, that Scagnetti captured in May 2006. Styles posted the photo without any credit or permissions, which if you visit his Instagram page, you'll find is something of a trend.

When Scagnetti found out about the offending image, which was approaching one million "likes" after 15 hours of being online, he posted to his Facebook page to share his frustrations. What happened next is pretty disappointing for all photographers. Here are some of the Facebook responses that PetaPixel posted on their article. To see the rest of them, check out the article. Trust me, they're all infuriating.

The hateful commenters appear to be mostly children, although I'm sure there are some irrational adults mixed in as well, so Scagnetti took to Facebook again in the attempt to educate his detractors.

Not everyone was out to get Ezequiel though, as many people have understandably sided with him.

Screenshot captured by Bokeh in their article on this ordeal.

The photo has since been removed from Harry Styles' Instagram account, although nobody associated with Styles has reached out to Scagnetti or offered anything by way of an apology. While some of the angry Harry Styles defenders understood that Harry hadn't taken the picture himself, his Instagram profile picture of himself holding a camera is incredibly misleading. Perhaps his image theft was an honest mistake, but the fact that someone could post an image to their personal account and present it like they took it without giving any credit whatsoever is troubling. What's more troubling, though, is that so many people would then blame the victim in this situation and act like he should be grateful his work was stolen. Hopefully some individuals learned something from Scagnetti's response and handling of the situation, but I'm not holding my breath.