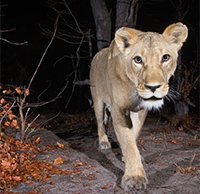 Wildlife photographer Will Burrard-Lucas, who worked for the World Wildlife Fund photographing rare African wildlife, made it a mission to capture the most elusive animals.

Some of them are very rare, so Burrard-Lucas set up five Canon DSLR camera traps and made images over the course of three months. No stranger to utilizing unorthodox methods to capture wildlife images, Will, along with his brother Matt, constructed the armored remote control BeetleCam to get up close and personal with dangerous wildlife, such as lions.

For this job, however, Will had to be more patient and hands-off while photographing in the 109-million-acre Kavango Zambezi Transfrontier Conservation Area (KAZA) Utilzing five Camtraption camera traps, Burrard-Lucas set up cameras in hot spots that he learned of from Lise Hanssen, who has studied the wildlife in the region for years. After setting everything up with Lise's expertise on the local wildlife, Burrard-Lucas left his cameras unattended and operational for an additional ten weeks.

His most fruitful camera trap was stationed in Mashi Conservancy near a waterhole, which captured images of "elephants, giraffes, eland, wildebeest, warthogs, and bushpigs." Guineafowl were a common subject for this particular trap as well, as Will estimates that there were "ten images of guineafowls for every other animal photographed."

Lions proved to be the most elusive and challenging of his subjects. Over the course of three months, lions passed by his camera traps a mere two times. During Lise's own research, she had never seen a lion in person in the KAZA region.

I photographed this young male lion while on assignment for @world_wildlife in Namibia. The aim of our project was to capture images of some of the most elusive carnivores in Africa. Find out more here: http://b-l.me/wwfproject