Must see: An excellent 5-minute video on the history of photography 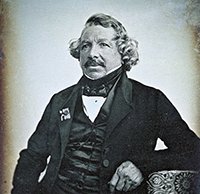 Ancient philosophers Mozi, Aristotle, and Alhazen were the first to mention the camera obscura as far back as 400 BC. In 1490, Leonardo da Vinci referenced camera obscura in detail and actually used it to make tracings. We begin to approach photography itself in 1724 when Johann Heinrich Schulze discovers that substances, when mixed with silver nitrate, react to sunlight, but the reaction faded away shortly thereafter. The first photograph wasn't taken until 1826 when Joseph Nicéphore Niépce used heliography. In 1833, Niépce's partner Louis Daguerre created "the first practical photographic process…the daguerreotype." Six years later, the French government purchased the daguerreotype and released it to the world. First photograph of a person (see the red outlined area). Screen capture from the video below.

It is around this time when photography starts to really take off. Mobile photographic studios start popping up, as photos had to be developed on site. Perhaps the world's first edited photograph appeared in 1861 when Abraham Lincoln's head was placed on a "more noble body." That same year, the world's first color photograph was produced. Ten years later, in 1871, Richard Leach Maddox developed the gelatin dry plate, allowing cameras to be smaller and not require a tripod. Perhaps one of the first edited photographs. Abraham Lincoln's head was put onto a different body. Screen capture from the video below.

George Eastman (founder of Eastman Kodak) invented roll film in 1885, pushing photography even closer to its modern form. In 1888, the Kodak camera went on sale. In 1900, Kodak released the Brownie camera, which made photography even more mainstream. Fast forward 25 years and Leica's Oskar Barnack develops the 35mm Leica 1. This was a revolutionary step forward, allowing photographers much more mobility than they had previously been afforded. 1949 saw the release of the first single lens reflex (SLR) camera. [Editor's note: This claim has been challenged by a reader in the comments section below this article.]

Just over 25 years after this, Eastman Kodak's Steve Sasson developed the first digital camera, but it wasn't much of a hit with Kodak executives, who didn't see the advantages of digital at the time, and wouldn't switch to digital until 2004, years after digital photography started to take hold in the 1990s. Watch the video below (Warning: There is nudity around the 1:40 mark of this video).

It is amazing to consider that in early photography, exposures were minutes long and cameras were massive. Today, technology that would've blown the minds of digital photographers not all that long ago now fits easily into our pockets. If you'd like to see more excellent photography videos, check out COOPH's YouTube channel.