Farewell, Picasa: Google shutting service down as of May 1st 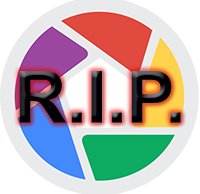 Founded in October of 2001 and acquired by Google in 2004, Picasa has allowed users to organize, edit, and share their photos for nearly fifteen years. Since launching Google Photos, users have been wondering what would come of Picasa. That's now officially been aswered, as Google has announced that Picasa is getting the axe this spring.

Google's head of photos, Anil Sabharwal, says of Google's decision, "We believe we can create a much better experience by focusing on one service that provides more functionality and works across mobile and desktop rather than divide our efforts across two different products." This makes sense, but I'm sure that it is nonetheless disappointing for Picasa users.

Starting on March 15th, Google will cease support of the Picasa desktop application. There will be no further updates to this software, nor will it be officially supported. It also appears that it will no longer be available to download, so you have a month to download it before it is gone. The end of an era. Google will be shutting down Picasa's web functionality on May 1st.

To help lessen the blow, Google is putting Picasa Web Album content into Google Photos. For users that don't want to use Google Photos but still want to access specific content, such as tags and comments, Google is creating a place for viewing this data. Although, it appears that creating, organizing, and editing albums will not be possible. These changes will go into effect on May 1st.

While perhaps inconvenient, this transition provides Picasa users an opportunity to try Google Photos, which has over 100 million users and free unlimited photo storage.