How It’s Made: Watch a Manfrotto tripod being assembled

how it's made manfrotto manufacturing news tripod tripods 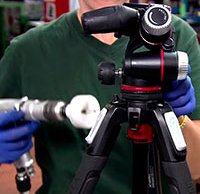 Manfrotto produces a wide array of aluminum tripods. In the video below from the Science Channel television series How It's Made, you can see workers assembling one of their tripods.

After the tubes are anodized and cut to their correct lengths, some of them are laser engraved with Manfrotto's name and the tripod's model information. Next two of a tripod's three legs have leg warmers put on them, to make them more comfortable to handle when exposed to extreme temperatures. Specialized collars are then added so that you'll be able to hinge the tripod's legs.

With the aluminum leg pieces put together, locking collars are bolted together around the legs. The tripod head appears to be the most complicated part of the assembly process. When that is done, the head is attached to the tripod's center column and everything is tested. Gear-heads: to see the assembly process, check out the cool video below!