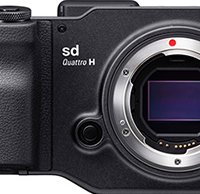 These cameras utilize layered Foveon X3 full color sensors to provide detail equivalent to much higher-resolution sensors. The 19.6-megapixel top layer of the APS-C-based Sigma sd Quattro combines with two 4.9-megapixel layers beneath to produce resolution that is reportedly comparable to that from a 39-megapixel Bayer-pattern sensor. The higher-resolution and larger APS-H sensor found in the Sigma sd Quattro H has a 25.6-megapixel top layer and combines with its layers below to produce an image comparable to that from a conventional 51-megapixel sensor according to Sigma. In both cameras, the top layer of the Foveon sensor captures detail and blue channel information whereas the pair of layers below handle red and green channel information.

Both cameras utilize the most recent Dual TRUE III image processor to take advantage of Sigma's Art, Contemporary, and Sports lines of SA-mount lenses, which have been produced for high megapixel cameras. What is immediately noticeable about both of these cameras are their distinct and unusual camera body designs. These magnesium alloy camera bodies are splash- and dust-proof, and also striking in their appearance.

Not afraid to mix things up in the design department (as is evidenced by Sigma's earlier dp Quattro line, for example), Sigma brings additional interesting features to the back of the camera. In addition to the 3-inch 1,620K-dot LCD monitor, there is also an additional sub-monitor to its right that displays shooting information that you might typically find on a camera's top-deck display (which both sd Quattro cameras do not have). The sd Quattro cameras also include a 2,360K-dot electronic viewfinder, which allows for automatic switching between the LCD and the EVF. The cameras also utilize a new hybrid AF system. The two-mode autofocus system uses phase detect autofocus for speed and contrast detection for accuracy. When manually focusing, a focus peaking option is available, too. The cameras have an ISO range of 100-6400 and both have a hot shoe on the top of the camera. The maximum flash sync is 1/180s. Moving to the left side of the camera, you can find HDMI, USB 3.0 Super Speed, and remote control connections. An optional battery grip is also available.

Shutter speeds range from 30s to 1/4000s, although a bulb mode is available for shutter speeds longer than 30s and up to 5.0 EVs of exposure compensation are available as well. Auto white balance metering is said to be improved with an updated algorithm to provide more accurate white balance metering. Like the Foveon-equipped dp Quattro and DP Merrill cameras that came before them, the new sd Quattro models do not include the ability to record video.

Pricing and availability information for the Sigma sd Quattro and sd Quattro H is not yet available, but you can look forward to more coverage of these cameras in the future. We can't wait to see how these two new mirrorless cameras stack up against competing high-resolution cameras. Previous Sigma cameras have proven capable of capturing high-quality images, so we anticipate good performance from the two new mirrorless bodies. It will also be interesting to see how the APS-H sensor in the sd Quattro H camera improves imaging performance. Stay tuned for more!