Previous Story Computers vs. Humans: Which will win the battle to geotag your photos?
Next Story Olympus Q&A, CP+ 2016: Corporate recovery, IS tech, whither the AIR, and the PEN-F “experiment”

Sony A6300 first impressions from Miami: Sunny skies ahead 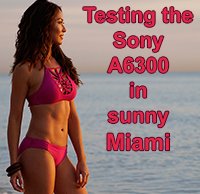 Sony packed an incredible number of activities and shooting opportunities into two very long days in Miami for us to be able to get an initial feel for the Sony A6300. While this didn’t allow much time to go through images or write up my thoughts during the two days, it did provide me ample opportunity to use the A6300 in a wide variety of situations, which presented different types of challenges. I came away rather impressed, with mostly positives and just a few not-so-positives to mention as well in this initial report.

After a welcoming dinner, I took advantage of the beautiful view from my balcony to put the high ISO capabilities of the A6300 to the test. I thought that the camera handled night shooting really well. Autofocus was quick and consistent and the default noise reduction did a good job at high ISOs. Tuesday morning started out with a sunrise shoot of beach volleyball players. The camera kept pace with the players really well and was able to maintain focus. The face detection even worked well through the volleyball net, which is not an easy task. For this shoot I had the A6300 paired with the Sony FE 70-200mm f/4 lens, which worked nicely. Although, I do wish that the Sony G Master 70-200mm f/2.8 and teleconverters had been ready for us to use. After the sunrise shoot and a breakfast/presentation, we were off to Aktion Parks Miami to photograph wake boarders. By this time, the sun was quite high in the sky and there weren’t many clouds in the sky, making for some very harsh and difficult light. While I wasn’t able to capture many shots that I am happy with, that is not the fault of the camera which did a very good job acquiring and maintaining autofocus as the extreme athletes tore through the water, making jumps and performing spins and flips. This burst shooting experience highlighted the excellent new electronic viewfinder. At continuous high shooting (versus continuous High +) the A6300 can capture images at up to 8fps, which is a bit slower than the top speed of 11fps but still plenty of speed for most situations. What makes this 8fps mode so alluring is the excellent viewfinder experience. For photographers who are used to an SLR experience, electronic viewfinders can sometimes be frustrating, particularly when trying to frame fast action sequences because you don’t get a real-time view of the action. When shooting in the 8fps mode, there is a brief viewfinder blackout after each frame rather than a view of the previously captured image. This does an excellent job mimicking an optical viewfinder experience and allowed tracking of fast action much easier than any other EVF I’ve used. Photographing wake boarders did highlight great subject tracking autofocus and a brilliant EVF experience, but it also brought attention to what is one of the A6300’s key weaknesses, the buffer. The buffer depth itself is not bad, but it is slow to clear and while the camera is processing images, you cannot access the menus nor can you view any of the images you just captured.

The menus themselves are a little clunky and poorly-organized, but I would still like to be able to access them while the camera is clearing its buffer. As is the case with any camera, you’ll be able to navigate menus quicker with additional experience, but the menus are far from intuitive. Following lunch at the water sports park, we headed to Miami Free Running Academy where the close quarters warehouse-style facility put the A6300’s slow-motion capabilities to the test. Capable of recording full HD video at up to 120fps, the A6300 has a wide variety of neat video features.

While I thought that the free running excursion tested the limits of the A6300’s autofocus in low light, the evening in Little Havana proved that I had yet to fully experience what the new camera has to offer in dim lighting conditions. At the historic Ball & Chain lighting was highly variable and often low. A band was playing lively music in the front area of the Ball & Chain, which proved very fun to photograph, especially with the 85mm f/1.4 G Master lens. Different colored lights shone down on the musicians as they played, meaning that there were abrupt, dramatic shifts in how the subject appeared. This didn’t seem to trip up the A6300’s autofocus system in my experience. More difficult was a salsa dance on a stage in the back of the venue. A pair of dancers moved very quickly, often spinning and switching places, but the A6300 didn’t struggle here either. This location also allowed me to further test out high ISO shooting. Again my experience was positive. Although in-camera JPEG processing sharpens images a bit too much for my taste, the default noise reduction applied to JPEG files seemed quite good and not overdone. The next morning was another bright and early start, this time with a sunrise shoot of a professional model on the beach. The light was beautiful, and Sony Artisan Brian Smith set up a light for us to use with a wireless flash trigger, which worked very well. Using the G Master 24-70mm f/2.8 lens was a great experience, as it focused very precisely and was sharp across the frame. Moving from the beach to the pool allowed me to further test out the A6300’s metering capabilities, as the white hotel in the background was illuminated and the natural light falling on the model was continually changing. Evaluative metering did a great job with both the exposure and the white balance. When exposure compensation was needed, up to five stops were available and was easily controlled by pressing down on the navigation button. Following a group breakfast and presentation from Sony’s Daisuke Suzuki (which was very informative, by the way) we headed to the Wynwood area of Miami, which is an arts district with a lot of fantastic street and wall art. If you want to see great graffiti, this is the place to be. This area really exemplified the A6300’s consistently good color rendition and automatic white balance capabilities. Colors across the entire spectrum were accurately represented and vibrant, although I found that reds came out a bit dull in the JPEG files straight from the camera. I tested out the improved video features in Wynwood as well. The A6300 is Sony's first APS-C camera that offers Super 35mm-format 4K video recording. In addition, the 4K video is actually downsampled from 6K data read directly from the sensor with no pixel binning. Video will need to be tested further, but my first impressions are that the A6300 will be a very capable video camera.

After about 90 minutes of exploring of Wynwood, it was time for lunch at a new Miami restaurant, Kyu. A few dishes were set out for culinary photography, definitely a genre of photography out of my wheelhouse. After lunch, it was time for a “surprise shoot” at the Dream Hotel in South Beach. Miami has been home to many iconic movies and shows over the years and Sony organized a shoot for us that played on Miami Vice, CSI: Miami, and Scarface. In three different areas, there were actors playing the roles of such characters as Crockett and Tubbs from Miami Vice and legendary Tony Montana from Scarface. With great props, the scenes were very cool and convincing. Although I’d have loved to see a room for my favorite Miami-based show, Dexter, I’m thinking that might’ve gotten far too messy. With a closing reception, my Sony A6300 and G Master lens experience had quickly come to an end. I'd have brought back everything for further field testing had they let me as I really enjoyed my time with the A6300.

Overall impressions of the A6300

Overall, the fast-paced and action-packed two days showcased the A6300 very well. Its autofocus features are top-notch. With 425 phase-detect autofocus points and 169 contrast-detect autofocus points, this industry-leading camera is well-equipped to deliver consistently accurate and fast autofocus performance. Improvements to the sensor’s imaging capabilities have also helped make the A6300 an excellent APS-C camera in low light. Following the trend of other Sony cameras, the A6300 doesn’t include a touchscreen, which I find disappointing, particularly when trying to quickly change autofocus points.

Both still photographers and videographers should be excited by the wide array of features and performance that the A6300 has on offer. For its price, the A6300 appears a superb value from my limited initial time. Launching in April at just under $1,000 USD, I suspect that the camera will be a hit with enthusiasts. Look forward to more on the A6300 when we receive our review sample in the coming weeks and put the A6300 through lab and further field testing, and check out our full initial sampling on our Sony A6300 Gallery page.

Tweet
Comment
Previous Story Computers vs. Humans: Which will win the battle to geotag your photos?
Next Story Olympus Q&A, CP+ 2016: Corporate recovery, IS tech, whither the AIR, and the PEN-F “experiment”