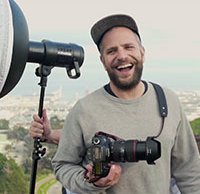 Lifestyle photographer Michael O'Neal was once creative director for Apple, but he is now working for himself and shared his motivation for doing so with Adorama as part of their Through the Lens web series.

Michael studied graphic and advertising design in his native New York before moving to San Francisco, where he worked as creative director for Apple. There he was able to see a launch of a product throughout all of its stages and how the marketing materials developed over time.

In 2011, O'Neal left Apple to work on his own and follow his passion for photography. Rather than focus on a particular kind of photography, O'Neal says he treats each individual project as distinct design problems that he needs to solve.

With so many excellent images out there today, O'Neal says that it's especially important to focus on making images that mean something to you. It isn't about "likes," but rather about creating something memorable, something that will bring the viewer into your image and make them feel as though they were there.

"I just wish that people would just be free to just share what they wanted to share and not worry about how people are judging them," he says, "but easier said than done." Later on, Michael says, "Through my photography, you can see me."

A photo posted by Michael O'Neal (@moneal) on

Regarding gear, Michael uses a Canon 5D Mark III with L-series glass, including a 24-70mm f/2.8 as his primary lens. He also regularly uses his iPhone to capture images. For lighting gear, he recently purchased a Profoto B1 kit with two heads and a variety of modifiers.

A photo posted by Michael O'Neal (@moneal) on

To see more of Adorama's Through the Lens series, check out the playlist on YouTube.