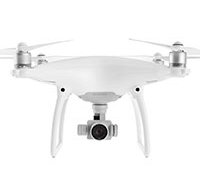 As the recently-announced DJI Phantom 4 starts to make its way out into the field, users are now able to test the Phantom 4's big features, including faster flying speed, collision-avoidance, more stable hovering, and improved subject tracking.

The team over at LIXI Studios have been testing out the new Phantom 4, including a video review which can be seen below. They also answer the intriguing question: can the Phantom 4 automatically track the Phantom 3? The answer is "sort of." After finally being able to lock on to the Phantom 3, the 4 struggled to maintain its lock. Another downside to tracking is that when using "active track" on the Phantom 4, you don't have any control over where the camera is pointed.

If you want to go really fast with the Phantom 4 (which can now fly at around 45mph, ascend at six meters per second, and descend at 4 meters per second) you have to activate Sport flight mode. Activating this mode disables all of the safety features, so it would not be ideal for novice drone pilots or using the drone in close quarters or around obstacles.

With its impressive speed, the Phantom 4 quickly exited its range and needed to return home. It managed to land within a few feet of its original takeoff position.

What about obstacle avoidance while tracking? While tracking a cyclist, the Phantom 4 did quite well with the tracking part but it did get itself temporarily stuck in a tree at one point and after it tried to automatically fly backwards it ended up moving further into the tree's limbs.

Overall, the team at LIXI Studios was very impressed with the Phantom 4's new advanced tracking features and collision sensors. It is unclear if the Phantom 4 will live up to the hype in all situations, however, as the tracking performance was inconsistent. When it worked, it worked really well and provided interesting shots. Collision detection worked for the most part, so long as the drone was moving slowly. The team didn't trust the auto-stop feature when using the drone at high speeds.

For more information on the DJI Phantom 4, see our news story covering the announcement. LIXI Studios also did an unboxing video for the Phantom 4, which can be seen below.