Previous Story Wondering how serious the rumored issues are with the new Sony 85mm f/1.4 GM? The team at LensRentals takes a closer look
Next Story Begone, reflections: Zeiss explains the science behind its famous T* coating technology

A simple guide to ISO: What happens when you increase your camera’s gain 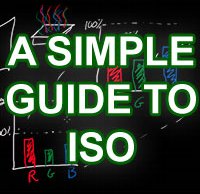 Have you ever wondered what is actually going on with your sensor when you increase your ISO? Why do images get noisier? Youtuber Dylan Bennett put together an excellent video that explains ISO in simple terms.

Considering the image sensor itself, made up of millions of tiny sensors -- aka photosites -- which all receive light and then record that light to each pixel that makes up an image. If we think about just one of these tiny individual sensors, it receives red, green, and blue light. The sensor takes this incoming light and determines which color should be recorded to a pixel in your image. The color of the pixel depends on how much of each color of light hits the tiny sensor.

An image sensor is made up of many smaller sensors. Each sensor can receive an amount of red, green, and blue light. This light is then translated into a color pixel which makes up your image.

Camera imaging sensors are electronic, as are numerous other components inside the camera, so there are consequences to increasing sensitivity, or decreasing its sensing limit. In a camera, there is a lot of electronic equipment and activity going on, and this activity interferes with sensors.

Imagine a black room with no light. When you record an image in these conditions, the electrical signals inside the camera will trick the sensor into thinking that it is receiving a tiny amount of red, green, and blue light. The sensor then records just a little bit of color variation for each pixel. When there is actual light for the sensor to record, all of these sensors layer the information from actual light over the light it thought it received due to electrical noise.

If you have plenty of light, this is insignificant because the electronic interference is delivering only a miniscule amount of noise to each image sensor. But what happens when you have less light hitting the sensor? Watch the video above to see! When the amount of light that hits a sensor decreases, you need to increase the sensor's sensitivity to make a properly-exposed image. When you increase a sensor's sensitivity to actual light, you also increase its sensitivity to electrical interference, or noise, leading to a greater amount of random color variation in your final image.

Make sure to watch the Dylan's video above to learn much more about ISO and digital noise. If you enjoyed Dylan Bennett's video above about ISO, you should check out the two videos below which cover depth of field and the concept of f-stops.

Tweet
Comment
Previous Story Wondering how serious the rumored issues are with the new Sony 85mm f/1.4 GM? The team at LensRentals takes a closer look
Next Story Begone, reflections: Zeiss explains the science behind its famous T* coating technology