Many travel photographs are taken on the fly, but sometimes stopping to add a little light can result in images of a place that couldn’t otherwise be captured, like the one here.

National Geographic photographer Ira Block created this image while leading a workshop in Bagan, Myanmar. Block found the small Buddhist temple with help from a local photographer and his friends at a nearby monastery. Young monks came to participate in the shoot, with one of them sitting on the Buddha’s knee for this photo.

By supplementing the available light from a window and doorway with candles and flashlights held by students, Block was able to bring out the beauty of the dim interior and work around a common restriction on travel photographers: no flash allowed. Block talked with us about the details: 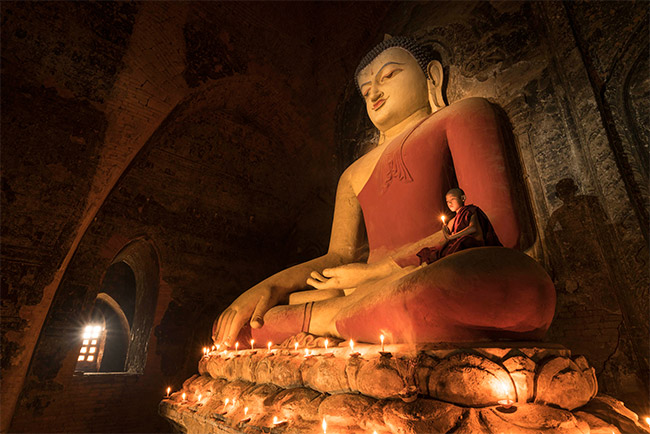 Click to see a larger version of this elegant photo, then expand your browser window to see it full-screen.

How Block got the shot.

Expand your browser window to see this image full-screen

“What is truly amazing with these Sony cameras is the incredible dynamic range that they have,” says Ira Block. “There’s detail way in the background on that brick wall. The highlights of the window are blown out, but there’s still detail in the window frame.”

He set his Zeiss® Sonnar T* FE 16-35mm F4 ZA OSS lens at f/5.6 to get the depth of field he needed to keep all of the key elements sharp while slightly softening the background and allowing a clean ISO 800 setting.

This content was made possible by support from Sony's Artisans of Imagery program.

“Less light is more sometimes. You want to keep the look and feel, and then add small amounts of light that will keep the mood.

I just took my Sony and put it on Spot. I read off of different areas and saw where things needed light. To me, the important things would be the hands and face of the Buddha. I wanted the face to be the correct exposure, because I didn’t want to have to start trying to light it. That’s complex. It’s very three-dimensional, and if I had to start throwing flashlights up on the face, we’d get some strange shadows.

Fortunately, the face was pretty bright from light coming in from a doorway directly in front of the Buddha. Then I metered the arm and saw that it was a little dark, so we threw a little flashlight on there. The novice monk was small enough that we could easily put a flashlight on him so that the robes lit up a little better, and the candle lit up his face.

Part of the ambiance is obviously the candles, so I was working at a low shutter speed and pretty wide f-stop. If you came in with strobes, you’d have to really turn them down quite a bit. Another nice thing about flashlights is they’re more focused than an average strobe. If you just put a regular reflector on strobes, they would light the whole thing up, and then you’d just be spilling light all over. You’d have to put grid spots on the strobes, and then suddenly you’d have a major production going on, with a lot of strobe heads, some booming out on C-stands weighted down with sandbags.

This was just pretty much down and dirty: Walk in, look around, do a couple available light readings, and see what the image is starting to look like. It’s basically a natural light image with point sources of flashlights accenting and highlighting different areas that needed it.”

This is the second of a series of Great Shots articles, each offering a look inside the creative process of an extraordinary photographer.

This content was made possible by support from Sony's Artisans of Imagery program. Want to see more from Ira Block? Head over to Sony's Alpha Universe or find him on Instagram at @irablockphoto.