Previous Story Photographer and National Portrait Gallery go head-to-head over image usage in wake of Prince’s death
Next Story Panasonic 35-100mm f/4-5.6 Lens Review: Lightweight both in size and on your budget 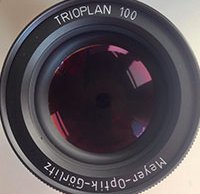 Mathieu Stern recently received an E-mount version of Meyer Optik Görlitz's new 100mm f/2.8 Trioplan lens to review. This lens was successfully backed on Kickstarter and will be available to backers in June 2016 for just under $1,600 USD (around 1,400 Euros). After the lens is released, the price will increase by just over $100 (100 Euros).

The original Trioplan lens was released in 1916 and this new version is actually based on the original design plans for the 1916 lens. Stern recalls what made the original lens famous: Its "soap bubble bokeh." His review consists of five parts -- the lens itself, the bubble bokeh, sharpness, its potential uses, and his conclusion.

As you can tell from the review above, Stern is a big fan of the lens' distinct bokeh and visual qualities. If you want to see high-resolution sample images, see his post about the 100mm f/2.8 Trioplan. You can learn more about the lens at its Kickstarter page and from the video below.

The Meyer Optik Görlitz 100mm f/2.8 Trioplan lens will be available for Canon, Nikon, Fuji X, M 42, Sony E, Leica M and Micro Four Thirds mounts. To preorder the lens, you need to make a 50 Euro deposit, which will be deducted from your final invoice.