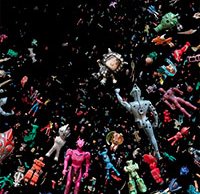 Plastic is an incredibly useful material, and in our modern world it's everywhere. Unfortunately, that includes our oceans. English photographer Mandy Barker photographs marine plastic waste , and her latest project focuses on debris found along 30 different beaches in Hong Kong.

Barker had hoped that documenting the incredible amount of material pollution she found would be enough to get people interested in working to clean up our oceans, but it wasn't. She decided instead to organize the plastic she found into interesting patterns and shapes. In the process, she has made litter beautiful and created powerful images that she hopes will stay with the viewer.

A photo posted by Mandy Barker (@mandybarkerphotography) on

The message is not that litter can be visually interesting, but rather that the important message -- that we need to take better care of our natural resources -- is made more "accessible," as she put it in an interview with Feature Shoot [Ed. Note: See the NSFW content warning below.] Sometimes we need to change the way we deliver a message if it is to be heard, and that's what Barker has done.

For those of you who're reading this at work, note that articles on Feature Shoot occasionally contain non work-safe images. Although this piece itself is work-safe, it's possible that there may be thumbnails promoting NSFW content from the interview article, so you may want to save the link for viewing at home if that's a concern for you.

In 2012, Barker was awarded an Environmental Bursary from the Royal Photographic Society, which allowed her to sail in the Pacific Ocean. On this trip, a member of the crew gave a presentation on Hong Kong's polluted beaches and Barker was stunned. It was at this moment that she knew her next project would focus on Hong Kong.

In addition to her project centered around debris found in Hong Kong, Barker has recovered marine plastic debris for use in her work from other areas of the Pacific, Atlantic and Indian Oceans. A map of the debris she has collected is viewable here.

A photo posted by Mandy Barker (@mandybarkerphotography) on

Roughly 8.8 million tons of plastic end up in our oceans every year. Barker's work gives us a very clear visual representation of the problem. To see more of her imagery from Hong Kong and other areas, see her website.

For our readers in Hong Kong, IR Senior Reviews Editor Mike Tomkins -- who hails from the one-time British colony -- points out that the non-profit Plastic Free Seas offers a variety of ways that individuals and companies can get involved including participating in beach cleanups, helping with prevention through education and outreach projects, or simply making donations. For those in other locations, we'd suggest the US nonprofit Ocean Conservancy as a good starting point for more information.