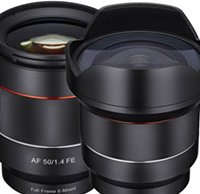 For the first time in the 40 years of manufacturing lenses, Samyang Optics is releasing autofocus lenses. Announced today in Seoul, both the 14mm f/2.8 and 50mm f/1.4 Sony E mount mirrorless lenses are designed for full frame cameras (such as the A7 II, A7R II, and A7S II) and are compatible with both contrast- and phase-detect autofocus for "fast and accurate" autofocus performance.

The Samyang 14mm f/2.8 ED AS IF UMC is "the widest angle [FE-mount AF lens] available in the market" and is designed to offer "a beautiful bokeh effect and the best quality images under various exposure conditions." Although official specs for the lenses are not yet available, it appears that the 14mm f/2.8 lens will not include a filter thread, which is par for the course for an ultra wide angle full-frame lens such as this.

On the other hand, the 50mm f/1.4 AS IF UMC incorporates a 67mm filter thread. According to Samyang, the lens' diameter allows the lens to bring in the most amount of light possible as well as offering excellent handling and user experience. Also new is the external design of the lens. On the left is the new 50mm f/1.4 lens and on the right is the existing manual focus 50mm lens. (This image is not to scale)

While full details of the lenses' optics are not yet available, Samyang does say that they both include aspherical lenses, which they hope will minimize aberration and provide strong optical performance from edge-to-edge.

For full-frame Sony photographers, the Samyang 14mm f/2.8 lens is the widest autofocus lens available for E-mount. Samyang does offer both an ultra-wide manual focus 12mm f/2.0 APS-C-format lens and a manual focus 14mm f/2.8 full-frame lens around the $300-$400 price range. It stands to reason that the new 14mm autofocus lens will most likely come in at a higher price point once that information is revealed.

The new 50mm f/1.4 autofocus lens joins Samyang's existing 50mm f/1.4 AS UMC manual focus lens, which currently sells for around $400. In addition to Sigma's 50mm f/1.4 Art lens (which is availble to Sony shooters in a kit with the Sigma MC-11 Mount Converter for $1,050), the new autofocus Samyang lens will be among the brightest autofocus 50mm lenses for FE-mount cameras. The new 14mm f/2.8 lens (left) looks a lot more modern and sleek than the existing manual focus 14mm lens (right), but they each include a built-in lens hood. (This image is not to scale)

It will be interesting to see how these autofocus lenses compare to their manual focus counterparts in overall performance, which have generally been rather well-regarded especially given the affordable price points. We'd love to take these new lenses for a spin in our testing lab.

The lenses will be on display at South Korea's Photo and Imaging 2016 Show in Seoul this week with a global release following in July. Additional information, including pricing, will be available at a later date.