Previous Story Canon 1D X Mark II First Shots: We get our hands on a final production copy of the flagship EOS camera
Next Story Fast and wide FE-mount lenses: Samyang picks Sony for its first-ever pair of autofocus lenses

High-speed photography made simple with the StopShot trigger 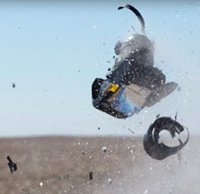 Chris Niccolls of The Camera Store in Calgary, Alberta, recently put Cognisys' StopShot fast action trigger to the test. From Cognisys' website: "Welcome to the world of high speed photography - the world where science and art collide." That's a rather grandiose statement, so does the product live up to the hype? Read on!

The StopShot includes multiple types of sensors, such as microphone, beam, and motion sensors. In conjunction with these sensors, you can trigger up to three connected devices including "flashes, cameras, water valves, solenoids, or any other low voltage electronic device."

You could try to freeze action with your shutter finger, right? Of course you could, but as Chris says you're going to end up wasting a lot of time trying to get the perfect shot. The StopShot automated trigger is designed to take the human element out of the equation and leave your next great shot up to technology, rather than your index finger.

For the first part of the video above, Chris utilizes the StopShot's laser trigger. Once the laser beam is broken, it will the trigger the device. In addition to the laser, he also used a microphone trigger. In the second part of the video, Chris tests out the StopShot for water droplet photography. Check out the video above to see camera gear (including a Canon 70-200mm f/2.8L lens) get obliterated by a rifle and see how Chris' first foray into capturing water droplets went with the StopShot. If you're interested in the StopShot, you can purchase it in a wide variety of kits here.