Previous Story Nikon D500 First Shots: The long wait is over as the successor to the D300S touches down in our lab
Next Story Canon 1D X Mark II First Shots: We get our hands on a final production copy of the flagship EOS camera 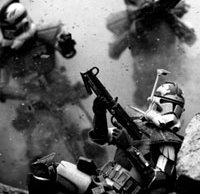 Though we never got a glimpse behind those stormtrooper helmets in the original Star Wars trilogy, as we've seen in later installments, including The Force Awakens, there are, in fact, humans under that armor.

U.S. Marine Combat Correspondent and photographer Matthew Callahan has been working on a personal project capturing humanizing photos of stormtrooper figurines. It can be all too easy to feel disconnected from real-life combat and those who serve, but Callahan hopes that his project will get viewers to stop and think about the people who are in the line of fire every day.

Marine Gunnery Sergeant Joseph DiGirolamo produced a video giving a behind the scenes look at Callahan's Galactic Warfighters series. It is really interesting to hear the motivation behind the project and see how Callahan is able to create such life-like images using small lifeless figurines.

You can see in the video above that Callahan uses both Nikon and Canon cameras for his work, including a Nikon D750 and a Canon 5D Mark III. The roughly 12-inch figurines can be tricky to pose at times and Callahan has to get creative to produce realistic-looking scenes for the figures.

Tactical Pause: Clone troopers rest against a bullet-ridden wall after returning from an 8-hour foot patrol outside their forward operating base. They say sleep is a luxury rarely granted. They take it when they can get it. #galacticwarfighters #starwars #rogueone #military #patrol #clonewars figures by @sideshowcollectibles

A photo posted by Matthew Callahan (@galactic_warfighters) on

Five years ago, Callahan was injured while in Afghanistan. His injury led him to pursue photography and this passion led him to train for his current enlistment as a combat correspondent. For a photography assignment during his schooling, he used a stormtrooper figure and his project was born.

CASEVAC: Clone troopers rush a gravely wounded soldier to a casualty evacuation point at an undisclosed location. Republic gunships hovered over the troopers to provide close air support until the CASEVAC low altitude assault transport came on station. Advanced recon commandos were embedded with clones assigned to the 104th Bn. and are seen assisting in the evacuation. #galacticwarfighters #military #casevac #starwars #casualty figures by @sideshowcollectibles

A photo posted by Matthew Callahan (@galactic_warfighters) on

A photo posted by Matthew Callahan (@bridgingthe__gap) on

(Seen via Fstoppers and SLR Lounge)

Tweet
Comment
Previous Story Nikon D500 First Shots: The long wait is over as the successor to the D300S touches down in our lab
Next Story Canon 1D X Mark II First Shots: We get our hands on a final production copy of the flagship EOS camera