Advice from a pro: Take risks and break out of your comfort zone to reinvigorate your photography 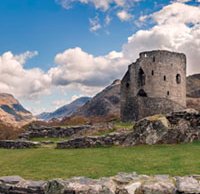 Professional photographer Sean Tucker will most often be found working in a studio, doing portraits or commercial photography. He started to feel like he was working on autopilot and wasn't always putting a lot of conscious thought into his work. He says that when you do the same thing every day, it can become difficult to continue to grow as a photographer.

His solution was to pack up his car and head to the great outdoors of Snowdonia in Wales and try his hand at landscape photography, a genre he doesn't typically shoot. In the tutorial below, Sean not only captures nice landscape images but he also has a lot of advice for dealing with being in a creative rut.

Sean found himself quite worried about the trip and what sort of photos he was going to be able to capture. He's not a professional landscape photographer after all. He had to wrestle with the idea that he might post images that aren't good, something he hasn't had to worry about in quite some time. Although as you can see in the video below, the trip turned out quite well for him.

Tucker quickly learned that unlike in the studio, there are many factors beyond your control out in the field. You can get up really early, trek up a mountain, and find that the scene is not what you had hoped for and you go home without any worthwhile images.

With a Canon 5D Mark II and Canon 24-105mm f/4L IS lens with a circular polarizer attached, Sean worked on capturing images in a variety of locations and conditions. Make sure to watch the video above to see the picturesque locations that he found and his thought process for different images.