Previous Story Don’t break your photos: Selective coloring and nine other mistakes you shouldn’t make in Lightroom
Next Story Capture distinct images with your mirrorless camera for cheap with these four “toy” lenses 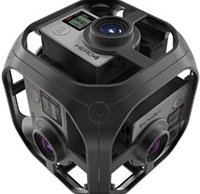 In a nice change of pace from the recent stream of bad news at GoPro, including the delay of the of its Karma camera drone and rethink of its product line in the face of falling profits, the company has released the first sample footage from its VR camera rig, the GoPro Omni.

The sample footage was recorded on the powdered slopes of Austria and combines footage from six GoPro Hero 4 cameras -- the same model GoPro sent into space last fall -- to create a 360-degree video. You'll want to cast a forgiving eye over the clip, though, as GoPro notes that "This video was produced using prototype Omni units. Expect significant improvements to the overall output quality upon the product release."

With the product set to release in August, you might wonder how much scope there is for improvement. It's not unusual for camera makers to continue tweaking firmware right down to the very last moment, though, and we've seen some fairly significant changes in products late in their release cycles before, so we're not too terribly surprised by the disclaimer. Check out the video above, not forgetting that you can click-and-drag to pan around the video as it plays -- and if your computer is up to the task, be sure to watch it in 4K, too for the best results! When the Omni releases on August 17th, it'll come in two configurations. For around $1,500 you can get just the Omni frame without any cameras. If you don't have any cameras, you can get an all-inclusive package including the rig and cameras for $5,000. To see all of the Omni's features, check out GoPro's product page for the array.

Tweet
Comment
Previous Story Don’t break your photos: Selective coloring and nine other mistakes you shouldn’t make in Lightroom
Next Story Capture distinct images with your mirrorless camera for cheap with these four “toy” lenses