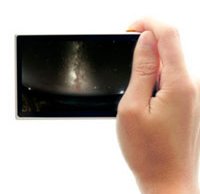 Astrophotography can be demanding, often requiring large, bulky gear for good results. TinyMOS hopes to change all of that with its Tiny1 camera, which it claims to be "the world's smallest, smartest, and most social astronomy camera." The Tiny1 has spent the last two years in the design and testing stage, and TinyMOS is now preparing to enter the crowdfunding stage with the goal of bringing its product to market.

As you can likely tell from the name, the Tiny1 isn't a very large camera. With that said, it does have a large 4.3" multi-capacitive touch IPS panel on the back. It also includes 3.5mm audio in/out, compass, GPS, and a three axis gyro/accelerometer in its aluminum body.

Lenses are attached to the Tiny1 via a C mount, which can accept a wide variety of lenses with the use of adapters.

The Tiny1 uses a 2.5K Ultra HD resolution backside-illuminated sensor with a claimed 65% quantum efficiency from its two-micron pixels. Output from the sensor is used to create 2,688 x 1,520-pixel files in raw, TIFF, or JPEG formats. For those keeping score at home, that's a roughly 4 megapixel image, which wouldn't be particularly impressive by modern digicam standards -- but if sensitivity is your primary goal, low resolution can be an advantage. Powered by a Qualcomm Snapdragon quad-core 1.8GHz processor and 4GB of RAM, the Tiny1 includes an augmented reality star map which can guide you toward stars and constellations and even provide the user with presets designed to capture specific elements of the night sky with (hopefully) ideal settings. It's a social camera too, allowing for direct sharing to social media.

As of right now, there's still quite a bit we don't know about the Tiny1, including its price. While a 4-megapixel image may not excite seasoned photographers, it could prove to be enough for those looking to dip their toes into astrophotography without committing to a large amount of gear. It'll be interesting to see if TinyMOS is able to strike a good balance between portability, power, and price with the Tiny1.

For more information on the camera, see here and keep an eye out for the IndieGoGo campaign at Thunderclap.