Meet SoloShot3, a new robot assistant that hopes to be your eyes and hands in the field 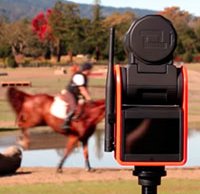 Ever feel like two hands just aren't enough to capture the shots you want? Do you want to capture yourself moving throughout a scene, but don't have (or want) someone else to control the camera? That's the need the SoloShot3 is intended to fulfil when it launches this winter.

By attaching your camera to the base, the Soloshot 3 should automatically pan, tilt, and zoom to keep you in the frame. The device will also offer a feature that promises to automatically identify highlights and edit video, potentially saving you time and trouble in the process. Clips can be pushed to the cloud from the device or even streamed live. You might be wondering how the SoloShot knows who to film. You use the companion application on your mobile device to pair the SoloShot base with tags for individual people. Each physical tag weighs 1.2 ounces and is 40% smaller and lighter than the previous generation tag. If everything works correctly, the robot cameraman will follow whoever is tagged by panning up to 80 degrees per second and tilting up to 120 degrees at 40 degrees per second.

SoloShot claims that the SoloShot3 tag is waterproof up to 50 feet and shock resistant for a fall of up to 25 feet onto asphalt. The base, on the other hand, is said to be "rugged enough for outdoor use" but not waterproof or shock resistant.

The regular SoloShot3 is designed for use with the Optic25 or Optic65 cameras which offer 25x and 65x optical zoom respectively along with different video specs. Until May 23rd, these are available for around $450 and $680 respectively, 24% off their eventual retail prices.

The SoloShot3pro is compatible with cameras that include a 1/4" tripod mount and weigh under 10 pounds. The Camera Adapter is said to allow zoom control, recording, photo bursts, and motion time-lapse with compatible DSLR or prosumer cameras. The full list of compatible cameras can be seen here. The SoloShot 3pro is available for roughly $460 until May 23rd, a 34% discount, and includes the base, a tag, camera adapter, and more. You may have noticed that we've tempered our expectations for Soloshot3 somewhat in the commentary above. The reason for that is fairly simple: A cursory search for the previous-generation SoloShot2 revealed a wide range of user experiences, some of which have been very negative. Users have commented on its inability to track subjects accurately, its unexpectedly short range, and other usability issues. It is not clear if the SoloShot3 will address these complaints. What is clear is that if it works as advertised, the SoloShot3 could potentially be a neat device that opens up some interesting shooting possibilities. Time will tell.