Previous Story Action fans: Olympus TG Tracker films your extreme exploits, gives you the data on how radical you were!
Next Story Fuji X-Pro2 Field Test Part II: A fast performer in almost every way 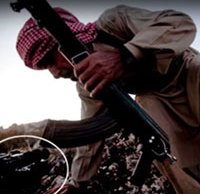 Wake up with IR! Here's today's cup of Caffeine Prioirity...

Truth is complicated, as evidenced by its lengthy entry in the Stanford Encyclopedia of Philosophy, which itself only scratches the surface of the concept. But what does truth have to do with photojournalism?

This is a topic which comes up occasionally, typically hot on the heels of some sort of scandal. Steve McCurry's latest exhibition in Italy has given rise to yet another round of discussions on photojournalism and just what the standard of objectivity ought to be. Rather than specifically talk about McCurry, I wanted to find some discussions about truth in photography in general.

There are decisions that you make as a photographer which are informed by a wide array of variables. Your decision to use one shutter speed over another, or to use a particular focal length, are decisions that affect how you are representing a subject. As soon as you press the shutter release, you have made a conscious decision to show certain things in a particular way, but more importantly you've made the choice to not show everything which sits outside of your frame.

You may recall the common oath delivered before sworn testimony, "I swear to tell the truth, the whole truth, and nothing but the truth…" or something along those lines. Is it even possible for an image to deliver the whole truth? If an image doesn't portray the entire truth, is it still truthful at all?

Let's assume for the sake of discussion that an image is capable of delivering a truthful depiction of reality. Is it okay to remove or add elements? Would it be acceptable to change exposure or contrast or crop an image?

There are a couple of videos below discussing truth in photography. The first is by Ted Forbes and the second is a response to Forbes by Chuck Jines.

The second video by Jines raises an interesting point. Can photojournalism be art? He says no. This echoes sentiments from legendary photojournalist Don McCullin who says that digital photography is a lying kind of experience and that photography isn't an art form. I'm not so sure I'd agree: Photographers such as McCullin certainly think about things like light and composition when capturing images, and these are questions of equal concern to an artist.

If we are to hold photojournalism to different standards and treat it differently than other types of photography -- which we certainly seem to want to do as a society -- then we need to make it crystal clear where the line between photojournalism and art is.

To me that line is very blurry these days, and for good reason. Like it or not, there is and always will be a measure of artistic intent even in photojournalism. Honestly, I'm okay with that. Are you?