Previous Story Create motion timelapses on the cheap: Make your own custom camera slider for under $100
Next Story Take to the skies for less: Become a 4K drone pilot for $460 with the Xiaomi Mi Drone

ZAP! Ultra slow-motion video of a lightning bolt at 7,000 fps is mesmerizing 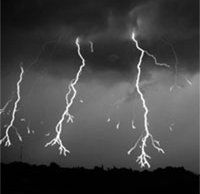 Lightning storms are one of nature's most exciting and fascinating displays. Part of the appeal of lightning is its amazing speed, which makes it impossible for the naked eye to see what's happening in the sky when each bolt strikes. Aiming to reveal the invisible, Professor Ningyu Liu at the Florida Institute of Technology's Geospace Physics Laboratory recorded lightning at a blistering 7,000 frames per second.

The video below, which is played back at 700 frames per second, offers a fascinating look at lightning as it streaks unpredictably through the sky. Housing research in atmospheric and space electricity, the Geospace Physics Laboratory at F.I.T. has existed since 1989 studies "theoretical and experimental studies in the area of lightning initiation, energetic radiations from lightning and thunderstorms, and Transient Luminous Events…"

While this modern technology is incredible, it is also interesting to take a look back at some of the earliest recordings of lightning strikes. We have a good idea of what lightning looks like now, but for a long time it was depicted as simple zig zag lines and shapes. It wasn't until lightning was captured using a plate camera in the late 19th century that we finally realized the complexity of lightning as it moves through the sky. We've now seen what modern high-speed cameras and very old plate cameras can do during a lightning storm, but what if you want to go out and capture your own images of lightning? PetaPixel has a great guide about shooting lightning which I suggest checking out. The article covers all of the things you need and most importantly it provides an important reminder to be safe out there. There is a treasure trove of information on lightning safety here.

If you want to get a bit more high tech and try to take some of the luck out of capturing lightning images, MK Controls makes a cool Lightning Bug device. This $180 tool mounts to your camera's hot shoe and detects the infrared light that occurs just before lightning strikes.

As we enter the time of year when lightning is most common in the northern hemisphere, many of our readers will have ample opportunity to capture beautiful lightning strikes. If the imagery above has motivated you to photograph lightning, please remember to be safe out there!

(Seen via Watts Up With That? and Hyperallergic)

Tweet
Comment
Previous Story Create motion timelapses on the cheap: Make your own custom camera slider for under $100
Next Story Take to the skies for less: Become a 4K drone pilot for $460 with the Xiaomi Mi Drone