Previous Story The strongest way of seeing: Huntington Witherill’s shares his composition secrets
Next Story Not for the frugal fisheye photographer: Rare Nikon 6mm f/2.8 Ai-S lens available on eBay for around $85k 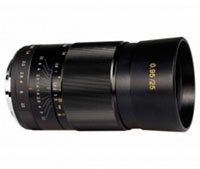 Starting with the 25mm f/0.95 lens, this fast wide angle prime has a full metal body and 10 groups of 12 lens elements. This is the most expensive lens in the group, as it's currently priced at nearly $660 USD in Sony E and Micro Four Thirds mounts on Amazon.

The 28mm f/2.8 lens is much smaller, essentially a pancake lens. Unsurprisingly given its size, it features a much simpler lens construction than the 25mm f/0.95 with six elements in five groups. This lens is currently available in Fujifilm, Sony E, and Micro Four Thirds mounts for just under $90.

Priced similarly to the 28mm f/2.8, the 35mm f/1.7 lens is also quite compact and light, weighing in at under 200 grams. Six lens elements are organized into five groups and the lens, like the others, has a metal construction.

For more information on these manual mirrorless lenses, see the product images below. To purchase one of these lenses, check Amazon to see if they have the desired lens in your camera's mount.

With the exception of the 25mm f/0.95, these new lenses have extremely affordable pricing. I'm sure making the lenses completely manual has helped keep the costs down. For a company not known for making lenses, it remains to be seen if Meike lenses offer good image quality and durability. One thing is for sure, though -- the price is right!