Illuminating accessories: Give your smartphone a fighting chance in low light with these add-ons 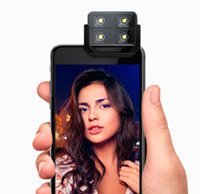 While you might not use your phone as your primary camera, it remains the case that smartphones are the world's most popular cameras, and many photographers are pleased to have one right in their pocket. On Flickr in 2015, a whopping 42 percent of photographers used their iPhone to capture images uploaded to the site, and phones in general accounted for 39 percent of all photos and videos.

An area of weakness for many smartphones is their difficulty handling low light situations. They're often paired with small sensors and have relatively weak flashes. Fear not, though -- there are many accessories you can get to improve your low light photos. The team at Phone Arena have put together a short round-up of flash accessories available for various smartphones.

For $35, you can add 46 Lumens' worth of LED light to your phone or tablet with the Xuma Mobile LED Light Set. Powered by 48 individual LEDs and able to be mounted in a variety of ways, including via your device's 3.5mm jack or a suction cup, the light includes a warming filter and can provide four hours of use per charge from its internal lithium-ion battery. The round-up includes a few headset-specific lighting accessories for Asus and Lenovo devices, but I wanted to offer up another universal option. For iOS and Android users, Concepter offers the iBlazr 2, which they call "the most versatile wireless LED flash."

Selling for around $60, the iBlazr 2 works with native camera apps on your devices and pairs via Bluetooth. You can even mount it via a cold shoe to your own dedicated camera. For more information on its many features, see here.