Previous Story Get shooting! Entries now open for the 10th edition of the Sony World Photography Awards
Next Story Illuminating accessories: Give your smartphone a fighting chance in low light with these add-ons 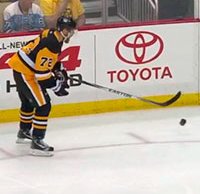 If you're a photographer and hockey fan, then perhaps the most gut-wrenching thing you saw during the second game of the Stanley Cup Finals last night wasn't a hard hit or hockey stick to the face, it was a lens falling onto the ice and then being briefly batted around by Pittsburgh Penguins forward Patric Hornqvist. Unless of course you're a San Jose Sharks fan too, then the most disturbing thing you saw last night happened a mere 2 minutes and 35 seconds into overtime.

Scattered around professional hockey rinks are small openings in the plexiglass, typically found in the corners, for photographers to shoot through. As one might expect, these cutouts in the glass occasionally lead to issues with small items falling on the ice. It is unusual however for a lens to land on the playing surface.

In the video above, you can see Patric Hornqvist quickly cycle through a variety of thoughts, "Okay, here comes the puck, I need to clear this…oh well, my defensemen will take care of that. Wait, what's this, the puck? This isn't a puck, is it? I need to hit it around to find out. Nope, not a puck, 'Hey, ref, ref, REF!'" According to Fansided, Hornqvist was quite convinced the little black lens was the puck until he attempted to play it with his stick.

Not shown in the video above is the likely very red and embarrassed face of the offending photographer and an angry Patric Hornqvist skating to the bench for a line change as he was still (literally) up in arms about what had happened. It's a good thing that Hornqvist didn't attempt to clear the "puck" via a slapshot because it could have taken a long to clear the ice of pieces of glass.

If you carry photo gear around long enough, there's a good chance you've dropped something at some point. Hopefully it wasn't a lens, or worse, dropped a piece of gear in the middle of a sporting event for all the world to see. What exactly is this mystery puck? Er, I mean lens.

I have been trying to figure out exactly what lens it was that hit the ice. At first glance, I thought that it was maybe a Sigma wide angle, but I'm not totally convinced. Eagle-eyed readers, what lens do you think this is? Let us know in the comments below!

Tweet
Comment
Previous Story Get shooting! Entries now open for the 10th edition of the Sony World Photography Awards
Next Story Illuminating accessories: Give your smartphone a fighting chance in low light with these add-ons