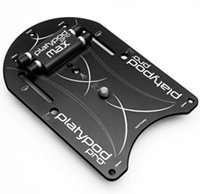 The Platypod Pro was released last year. Designed to support cameras with small to medium size lenses, this $50 camera support kit promises to help photographers set their cameras up for very low angle shots, something that is often difficult -- if not impossible -- with traditional tripods. And now, the makers of the Platypod Pro have launched a Kickstarter campaign for the follow-up Platypod Pro Max, which is aimed at photographers who use "heavy DSLRs, large lenses and full-size video cameras."

Specifications state that the Platypod Max can support up to 300 pounds of equipment despite weighing only 13 ounces. The anodized aircraft-grade aluminum camera support includes five 1/4-20 threaded holes and includes 3/8-16 threaded holes for attaching the Max to "tripods or quick-release devices." Getting low is often a good way to create visually interesting and dynamic compositions. However, it's often not ideal to set your camera directly on the ground, or to have to get down on your hands and knees to set up your shot. The Platypod Pro Max hopes to help photographers capture these shots from typically difficult angles even when they are using heavy equipment.

It's not just bigger and stronger, the Max also includes a pair of slots for threading through belts, tape and more to attach the tripod to a freestanding object, such as a pole or post. It's also compatible with a variety of quick-release systems such as the Peak Design Capture Clip. For times when you don't need to use the four spike-screws to stabilize the Platypod Max, you can store them on the tripod itself in an included detachable box.