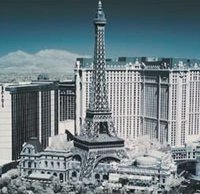 I'm admittedly a sucker for infrared photography and video. Filmmaker Philip Bloom took an infrared-modified Sony RX100 IV with him to Las Vegas and recorded a cool slow-motion video.

With a 665 nanometer filter attached to the modified RX100 IV, Bloom recorded a series of 250 frames per second bursts and compiled them into the video seen below. When recording at 250fps on the RX100 IV, each clip is only two seconds long in real-time, so he said that a lot of clips were tossed aside during editing.

To make things more difficult, many of the clips were shot from the inside of a moving vehicle as he rode down the street. The second movement of Beethoven's "Seventh Symphony" helps to set the mood in the video below.

For much more information on the process, including the camera itself and editing the footage, see Bloom's blog post here.

Want to know how to get your own RX100 IV modified as Bloom's was? He had his camera, and other infrared cameras in his collection, modified by the folks at Life Pixel.