Previous Story Photo mythbusting: Do UV filters truly reduce image quality, and should you use them?
Next Story Taking to the tunnel with a 5D Mark II and claiming the $300 prize: Our May contest winners revealed!

panAFRICAproject: Is the western media doing Africa an injustice? 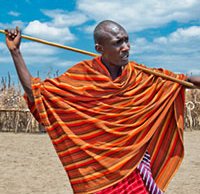 Accomplished photographer Lou Jones has been working on a long term project to create a repository of images that show what he believes is the true Africa. His portrayal of Africa often does not align with the imagery of the continent found in western Media.

The panAFRICAproject team has been making images of different African countries which they hope will "re-introduce the positive values of today's Africa." The project was put on Kickstarter last month and recently met its goal. The funds will be used to travel to the next African country on the list and add more images to the collection.

Related to this project, Robert K Baggs at Fstoppers asks "is the most famous photography of Africa fueling stigmas?" In his article, he discusses the types of images we most often see from Africa -- typically ones showing poverty, malnourishment, failing infrastructure and violent conflict. I think Jones' claim that the real Africa is much more complex than the photos we regularly see is most certainly true. They tend to boil the continent down into a variety of simple, negative situations. The panAFRICAproject is important and doing excellent work to show Africa in a more realistic (and positive) light, but I hope that the negative issues that exist there aren't lost in the shuffle. Baggs asks a series of very interesting and poignant questions in his take on photography from Africa. I highly recommend giving it a read.

And of course, I also recommend checking out more about the panAFRICAproject as Jones and the rest of the team continue their important work in bringing a better balance to the types of photos we see from Africa.

Tweet
Comment
Previous Story Photo mythbusting: Do UV filters truly reduce image quality, and should you use them?
Next Story Taking to the tunnel with a 5D Mark II and claiming the $300 prize: Our May contest winners revealed!