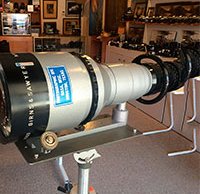 We've talked about rare and expensive camera equipment before, but this latest lens is unlike anything I've yet seen before. Jim Headley, founder and owner of Old School Art and Camera in Nebraska, is selling his 1000mm f/4.5 lens.

This Birns and Sawyer Omnitar telephoto lens was commissioned by NASA in the 60s and was built in Germany by Astra.

Headley came into possession of the lens 20 years ago when he traded multiple view cameras for it at Rainbow Photo in Wyoming. The lens came with its original case, a rolling tripod and NASA tags. Headley made a Canon EOS mount adapter for the lens and tested it on a Canon EOS 40D. Jim Headley with his Birns and Sawyer Omnitar 1000mm f/4.5 lens attached to a Canon 40D.

If you're thinking, "Wow, a 1000mm f/4.5 lens? That must be heavy!" You're right, it's heavy, weighing in at a back-straining 70 pounds. Including its large lens hood, the lens is four feet long and has a maximum diameter of ten inches. More details on the lens can be found on Headley's dedicated webpage.

The lens will be placed up for auction by New Hampshire-based auction house RR Auction. If you're interested in the lens, you can contact Jonathan Siefken at 603-732-4280 for more information.

Jim Headley is a Shutterbug reader and reached out to them about his lens after seeing their post about a recently-published Canon patent for an EF 1000mm f/4.5 DO super telephoto lens. As you may recall from earlier Canon DO lenses, the DO designates diffractive optics which allow for the creation of relatively smaller and lighter lenses. The 70-pound lens is around four feet long, and thankfully comes with an included rolling tripod.

The patent was originally seen on Egami and then discussed on Canon Rumors earlier in June. The patent, which may or may not result in a new 1000mm f/5.6 lens making it to production, was filed in 2014 before being published on June 2nd. The patent describes a lens that is nearly 20 inches in length. Which, while large, is still much smaller than the 1000mm f/4.5 lens seen above.

Technology sure has come a long way.